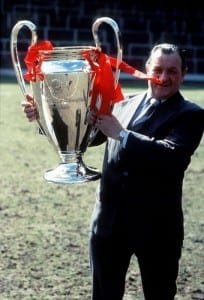 "There was only one Bob Paisley and he was the greatest of them all. He went through the card in football. He played for Liverpool, he treated the players, he coached them, he managed them and then he became a director. He could tell if someone was injured and what the problem was just by watching them walk a few paces. He was never boastful but had great football knowledge...

"I owe Bob more than I owe anybody else in the game. There will never be another like him." - Kenny Dalglish.

Robert “Bob” Paisley was born in Durham on 23rd January 1919. From leaving school at 13, Paisley worked in the pit with his father before playing for Bishop Auckland in 1937. He won the Amateur Cup with them in 1938 before signing as a professional with Liverpool in 1940.

Before he could play first team football at Liverpool however, the outbreak of the Second World War saw Paisley signed up to the 73rd Regiment of the Royal Artillery. He served with Montgomery's Eighth Army, the "Desert Rats", as an anti-tank gunner and saw active service in Italy where he was part of the liberation of Rome from the Nazis. 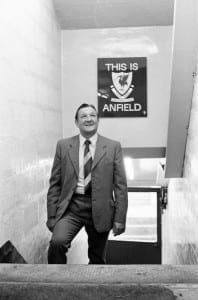 Bob Paisley at Anfield after taking over as Liverpool manager following the resignation of Bill Shankly.
26th July 1974. Pic courtesy of Mirrorpix

Following the war he was part of Liverpool’s first post-war competitive match, an FA Cup Third Round fixture against Chester City, and spent his entire playing career with Liverpool until his final game in 1954.

Paisley stayed at Liverpool, initially taking a role as a self-taught physiotherapist and then as chief coach until he took over from the great Bill Shankly, who retired following the 1974 FA Cup Final victory. Far from suffering in comparison to his predecessor, Paisley led the club to almost unimaginable levels of glory.

Shankly had taken over the management of Liverpool with the team on the decline in the Second Division. With Paisley as his assistant, the team was transformed into league, FA Cup and UEFA Cup winners.

Having spent 44 unbroken years in various roles with Liverpool, Paisley retired at the age of 73. His contribution to the club led to him being made a freeman of the city of Liverpool in 1983. Liverpool unveiled the "Paisley Gateway", commemorative gates to Bob, in front of the Kop stand on Walton Breck Road shortly afterwards.