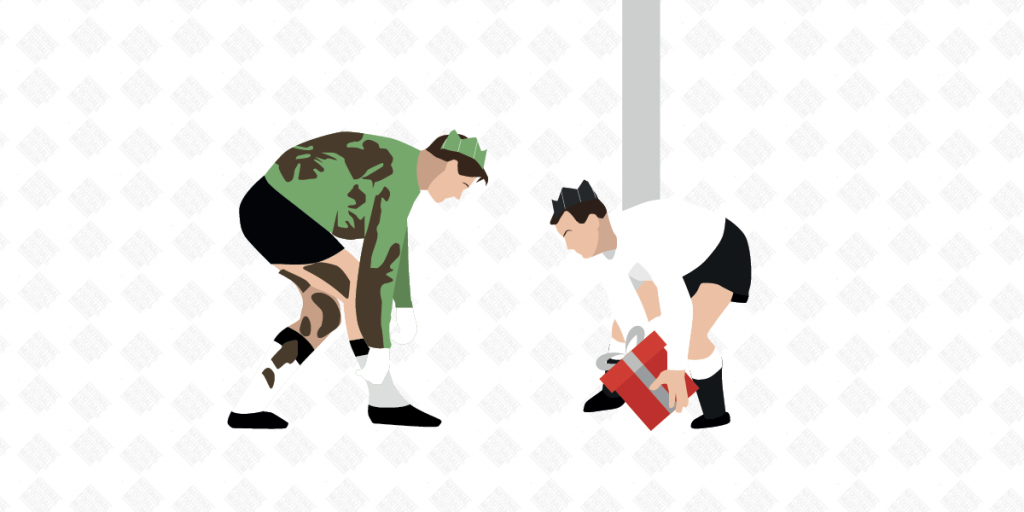 Football fans will always remember key games in the sport’s history: an underdog triumph or a high-scoring classic; a seminal cup victory or a nail-biting title decider. But how often does an entire gameweek make its way into football folklore? That’s precisely what happened on Boxing Day 1963.

As we established in our First Game of Christmas, Boxing Day football had been a thing as far back as 1860. When the English Football League came into being in 1888, two games were played on the occasion: Bolton Wanderers defeating Derby County 3-2 at the Racecourse Ground, and Preston North End’s 5-0 humbling of West Bromwich Albion down in the Midlands.

Since then, only two things have prevented football from taking place on Boxing Day: war and Sundays. No Football League fixtures would take place on the day of rest until 1974, and did not become an established part of the game for many years. Indeed, it was not until the dawn of the Premier League that top-flight fixtures took place on a festive Sabbath, with six top-flight teams in action in 1993.

Boxing Day fell on a Wednesday in 1962, but only three Division One fixtures took place that day, rather than the usual eleven. The “Big Freeze” was about to take a firm grip of the nation, with the following winter becoming the coldest on record since 1739-40. Boxing Day was just the start: plummeting temperatures frequent snowfall would wreak havoc on the football calendar until mid-March 1963.

No such increment weather befell the Football League the following year, and the twenty-two top-flight teams in action that Boxing Day set about making up for lost time. 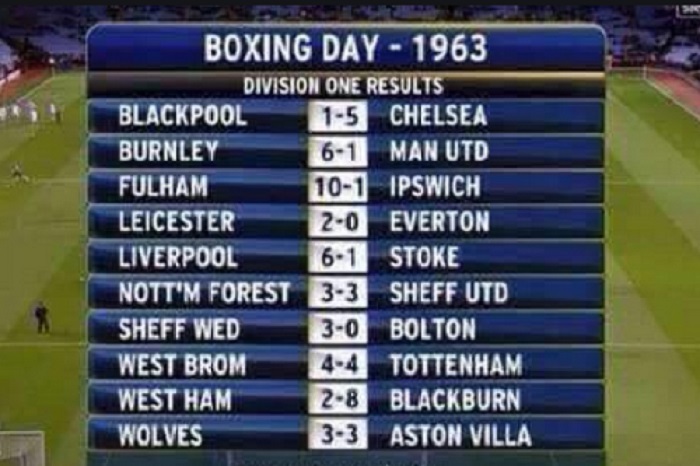 Manchester United fans had enjoyed their more recent Boxing Day excursions. Three years prior, 50,000 fans at Old Trafford saw the Reds run riot in a six-goal thumping of Chelsea. The following year, United repeated the feat, putting six past Nottingham Forest (though Forest did score three of their own). Even a tricky trip to Fulham the previous year yielded all three points, Bobby Charlton scoring the game’s only goal.

A relatively strong United side featuring Charlton, David Herd and skipper Bill Foulkes, made the one-hour journey north to Turf Moor. There, they were humbled by hosts Burnley in one of the biggest shocks of the day, if not the decade.

Andy Lochhead opened the scoring in the first half, and though Herd equalised before half time, it was all for nought, as Burnley ran riot in the second half. Lochhead’s name featured a further three times on the scoresheet, and fellow Scot Willie Morgan – who would go on to sign for United in 1968 – netted twice in a 6-1 rout. Matt Busby’s misery was compounded late on by Pat Crerand’s violent conduct and subsequent dismissal.

For the return fixture two days later, Busby made a number of changes – among them the reintroduction of a 17-year-old winger, who was instructed to leave his family in Belfast post-haste and report for duty. That winger was George Best; he terrorised his opposing number throughout the 5-1 revenge victory at Old Trafford, and scored the first of his 179 goals for the club.

The Boxing Day result played into the hands of fellow title challengers Liverpool, who recorded a 6-1 win of their own at Anfield. Stoke City were the unlucky visitors that day; in a parallel to the Turf Moor fixture, the Potters’ John Ritchie had cancelled out Ian St John’s opener, only for Roger Hunt to score four times in the second half. Fellow forward Alf Arrowsmith was also on target as Bill Shankly’s side.

Elsewhere, Blackburn Rovers kept up their title tilt with a comprehensive 8-2 drubbing of West Ham United down in East London, Andy McEvoy and Fred Pickering netting a hat-trick apiece. Making the opposite trip from London to the North West, Chelsea also enjoyed their Boxing Day, Barry Bridges bagging a hat-trick in a 5-1 demolition of relegation-threatened Blackpool.

Even the day’s three draws were high-scoring affairs. Top of the table at Christmas, Tottenham Hotspur were held in an eight-goal thriller at the Hawthorns. Despite falling 2-0, 3-1 and 4-2 behind, West Bromwich Albion eventually overturned that two-goal deficit, courtesy of late goals from Micky Fudge and Don Howe. Jimmy Greaves’ brace looked like it would be enough to secure a fourth straight league victory for Spurs, but in the end, they had to settle for a point.

Meanwhile in the Midlands, Wolves and Aston Villa scored three apiece at Molineux, with the spoils shared on the day. Similarly, Nottingham Forest and Sheffield United played out a pulsating 3-3 draw at the City Ground, while United’s local rivals Sheffield Wednesday comfortably defeated a visiting Bolton Wanderers side by three goals without reply.

And, despite defeating the previous year’s champions, Leicester City’s impressive victory paled into insignificance in terms of scoreline: a Ken Keyworth brace was enough to see off Everton, but not enough to prevent the Filbert Street fixture from being the lowest-scoring of the day.

The highest-scoring? Remarkably, it was not the ten-goal feast served up at the Boleyn Ground. Fulham hosted an Ipswich Town side that had won just twice in 23 league games: on the opening day of the season, and five days before Christmas, an impressive 3-2 win over West Ham United.

Any cautious optimism and festive cheer felt by the travelling fans was snuffed out within 20 minutes at Craven Cottage. Maurice Cook opened the floodgates in the 16th minute, before Graham Leggat stole the show. The diminutive Scot scored three times in as many minutes: the first off his knee, the second a Di Stefano-esque curling strike, the third a howitzer from 25 yards.

Leggat held the record for the fastest top-flight hat-trick for the next 52 years, until it was broken by Southampton’s Sadio Mane in 2015.

Four goals to the good within the game’s first quarter, you could forgive Fulham for putting their feet up a little, but there was no let-up from the Cottagers. Bobby Howfield made it five a minute before half-time; though that strike was cancelled out by a goal from Ipswich’s Gerry Baker right before the whistle, Howfield would net again three minutes after the restart.

More misery was to come for Jackie Milburn’s flagging side. Bobby Robson, a future hero at Portman Road, scored Fulham’s seventh of the afternoon, and Howfield completed a hat-trick of his own in the 72nd minute. Midfielder Alan Mullery looked to have completed the drubbing with a rare goal in the 89th minute. However, there was still time for Leggat, influential throughout, to curl in an outrageous goal from out on the left wing to take Fulham’s tally into double figures.

The Daily Herald’s Frank Taylor reported that Fulham had “salvaged London’s pride” after West Ham’s battering by Blackburn earlier that morning. In a scathing critique of the visitors, he wrote: “If Ipswich had a defence I’m afraid I didn’t notice it.” The Daily Mirror suggested that the hosts could have been four goals to the good before Cook’s first strike found its way past ‘keeper Roy Bailey: “It was that one-sided”.

Talking to the newspaper in the immediate aftermath of the game, both sides saw humour in the result. “It must have been all those lovely turkeys we gave ‘em for Christmas that did it,” joked Fulham manager Bedford Jezzard. “From now on they get one every week.” The humour from Ipswich chairman John Cobbold was understandably more droll: “It could have gone either way – at least until the match began.”

In total, an astonishing 66 goals were scored across the day’s ten fixtures. While Blackburn fell away thereafter, Liverpool would maintain their fine form into 1964, winning the championship by five points ahead of rivals United. Perhaps unsurprisingly, Ipswich Town were relegated in Milburn’s sole season in charge.