June is dedicated to Pride, marking a season for celebrating LGBTQ+ identity and raising awareness of the social and political inequalities surrounding sexuality.

Had the museum been open this month it would have run LGBTQ+ Tours exploring the role of influential LGBT+ players within the history of the beautiful game, and the impact they have had on the game of our lives.

In February museum interpreter Lois Stone took visitors around our galleries exploring key figures in football. Lois told the story of Justin Fashanu, the UK’s first openly gay male professional footballer (and recent museum Hall of Fame inductee), as well as telling visitors about initiatives of clubs such as Hackney Women and Altrincham while also looking at the work of bodies such as Football v Homophobia.

As we enter Pride month we chat to Lois about the importance of LGBTQ+ stories and history being included in museums. 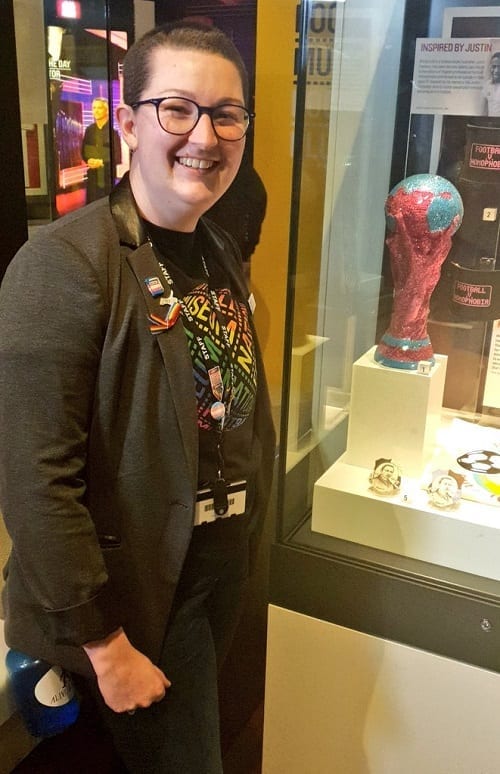 Tell us about your role at the museum

I’ve been at the National Football Museum for nearly four and a half years. I work as a museum interpreter, which entails working on the galleries and giving tours. I also work as an education practitioner as a part of the learning team. In that role I lead educational sessions for visiting groups. Both of these roles are in addition to working on my PhD at the University of Manchester, which I am finishing soon.

How did the LGBTQ+ tours come about?

My PhD thesis looks at the inclusion of narratives about trans people in museums in the UK and I have done other work regarding LGBTQ inclusion in museums. As I spent time on the galleries at the National Football Museum, I started thinking about LGBTQ representation in the museum.

Just as an exercise for myself I wrote an outline of what kinds of projects I thought the National Football Museum should do to become a welcoming and affirming place for LGBTQ people.

As part of the planning for Pride 2019, I talked to Sam Broadley (the museum’s programme co-ordinator) and told him about my idea for an LGBTQ themed tour of the museum. He supported the idea, so I drafted a list of objectives for the project and we started putting it all together.

How did you pull it all together?

The very first thing we did (after putting together our objectives) was reach out to the local LGBTQ community to ask for volunteer researchers. One of the key parts of this project was that it would be developed in partnership with LGBTQ people.

We started advertising for volunteers during Manchester Pride 2019 and had responses from all over the country. Most of the people responding were LGBTQ themselves, but many were straight allies who were excited about a project about inclusivity in football! Some of the volunteers who weren’t Manchester-based agreed to volunteer remotely and would send research they had found via email.

We had a core group of volunteers in Manchester that included Will Gittins, Emily Jeffers, Gabrielle Salomon, and the founder of Just A Ball Game?, Lindsay England. The group met over four sessions, where we discussed different approaches to LGBTQ history and how museums write object interpretations and where we shared research and discussed how to put the tour together.

What role should museums and galleries play in telling LGBTQ+ stories?

Museums help to tell us who we are.

They tell us stories about where we’ve come from and about the people who got us here. LGBTQ people have always been part of our world and a part of the history of football and should be part of the stories that museums tell. The National Football Museum prides itself on telling the story of The Game of our Lives, and that includes the lives of LGBTQ people.

LGBTQ people have always been present and always been contributing to sport, to culture, and to history, and that should be evident in the display at any museum.

Curator E-J Scott has said: “To not see yourself on the walls of a museum is to be rendered historically homeless”, and the National Football Museum has a role in providing a home for the history of LGBTQ people in sport.

What reaction did you get from visitors on the tours?

The reaction from visitors was overwhelmingly positive. Many of the visitors came to speak to me afterwards to tell me stories they knew about personally, or to give me extra information about objects that were on the tour.

I’m already having to update the tour with new information! We’ve already had inquiries about the next tours, which is an amazing thing to hear.