This is a black and white photograph of Southampton parading the Women’s FA Cup trophy (then known as the WFA Mitre Challenge Trophy).

Southampton had won 3-1 in a match against Scottish team Stewarton and Thistle at Crystal Palace. This was the first WFA Mitre Challenge Trophy final, held 9 May 1971. 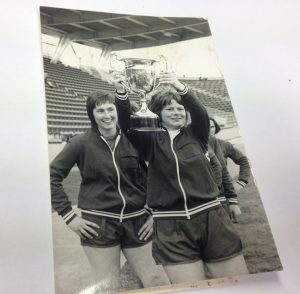 When did the Women’s FA Cup start?

The Mitre Challenge Trophy, which we now know as the Women’s FA Cup, was designed as an equivalent to the FA Cup in men’s football and began in 1970-71.

Tell us about Sue Lopez

Sue Lopez is a former English international footballer who has made an incredible contribution to the game.

Beginning her career at 21, she made her debut for Southampton WFC. She had a year playing in Italy with Roma where she helped them to silverware – before returning to Southampton.

Lopez won 22 caps as an England International over a period of seven years. During her time on the south coast she played in 10 Women’s FA Cup Finals. 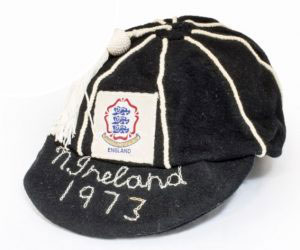 Lopez retired from playing in 1985 and began coaching. She was a part-time manager of the Welsh national women’s team from 1995-96. Following this, she was the Coaching and Development Officer for Hampshire Football Association until 2000.

Yes. In 1971 she became the first Englishwoman to play semi-professionally as an overseas player when she was signed by Roma.

During her season in Italy Lopez won the Golden Boot, an award presented to the leading goalscorer in all European leagues during a season. Her goals helped Roma win the Italian League Cup. On her return she helped form the first ever officially sanctioned England Women’s team.

Lopez was also instrumental in organising the first England Women’s international to be played on a Football League ground, following the removal of the ban on women’s football that dated back to 1921.

In 1991, Lopez became only the second woman to gain the FA Advanced Licence coaching qualification. In 1996, she gained the UEFA A Licence.

In 1999 she was awarded Sunday Times Female Coach of the year and awarded an MBE in 2000.
In 2004, she was inducted to the National Football Museum’s Hall of Fame.