It was described as a ‘graceful, powerful action’ initiated and coordinated by the players to show support for racial justice.

When Premier League football resumed following the lockdown the stars of the game showed respect to two causes. They wore match shirts with the NHS logo in solidarity with medical workers who had worked tirelessly during the coronavirus pandemic. 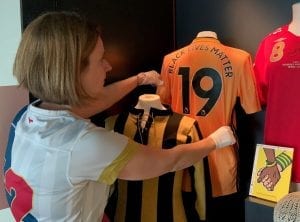 Players also took the knee before matches – to support the Black Lives Matter movement. The gesture was first made when Aston Villa played Sheffield United – the first football fixture for 100 days. The teams also wore shirts with Black Lives Matter message on the back – instead of their own names.

The museum was honoured to receive a shirt from Wolverhampton Wanderers from their first match back following the suspension of all football. The item will be a reminder to future generations of how the game responded to global issues of 2020.

What is this shirt?

This is a number 19 Wolverhampton Wanderers shirt belonging to Jonathan ‘Jonny’ Castro Otto. He wore it in Wolves’ first Premier League match following the suspension of the league due to the Covid-19 crisis.

Wolves beat West Ham United 2-0 at London Stadium on 20 June. This shirt features the NHS badge on front, Black Lives Matter badge on sleeve and lettering on the reverse.

Tell us more about Jonny Otto…

Jonny Otto is a Spanish international defender who signed for Wolves at the beginning of 2019.

He had been on loan at Molineux since summer 2018 and made his debut Premier League appearance that August against Everton.

He made his senior debut for Spain on 11 October 2018 at the Millennium Stadium defeating Wales 4-1 in a friendly.

How did we get his shirt?

As part of our contemporary collecting project around Covid-19 and the re-start of the season, we made contact with various clubs to ask whether we could collect any material from their first matches back after the pause.

This is an unprecedented time in football, so we want to make sure that we tell the story of 2020 in our galleries. Wolves were keen for their part of that story to be told to future generations and sent us this match-worn shirt.

Not only is the shirt important as it was from Wolves’ first match back, but it’s also significant for other issues in society at the moment.

Instead of Otto’s name on the reverse, the shirt features Black Lives Matter reflecting the movement that attracted thousands of people to demonstrate all over the world in recent months. The shirt also features a heart-shaped NHS logo paying tribute to healthcare workers during the pandemic. 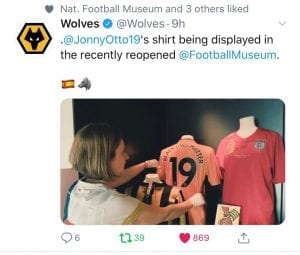 Is it on display at the museum?

Yes. We were very keen to get this short on display as soon as we reopened at the end of January. It shows how the museum is collecting contemporary objects that tell a story. This shirt will forever represent a important era, not just in football, but in social history.