Paul Gascoigne shot to fame at the World Cup exactly 30 years ago. His performances for England in Italy in the summer of 1990 made him a household name. ‘Gazzamania’ swept the country and his star was caricatured in a top TV satire called Spitting Image. Collections manager Wiebke Cullen takes a closer look at this legend in latex… 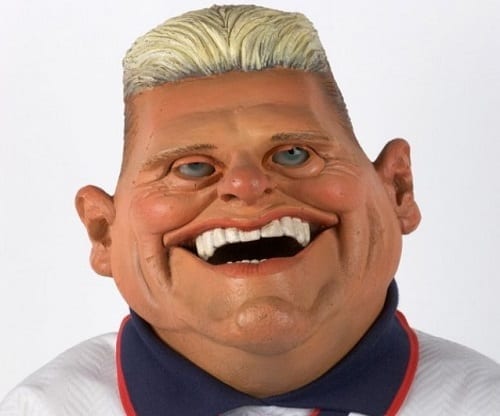 Tell us about this object?

This is a latex puppet of Former England player Paul Gascoigne produced for the satirical TV show, Spitting Image. This is a very popular object in our collection. The puppet Gazza would frequently burst into tears, poking fun at his 1990 World Cup semi final experience. The then 22-year-old’s bottom lip wobbled when he picked up a yellow card against West Germany in Turin. The booking meant he would be ruled out of the final. A final which England, of course, would never reach. This Spitting Image puppet is depicted in an England 93/94 – a few years after that fated semi-final.

What is Spitting Image?

Spitting Image was a hugely popular ITV television programme in the 1980s and 1990s. The show used puppet caricature to satirize politics, entertainment, sport and British popular culture. Everyone from Madonna to Margaret Thatcher was portrayed in the show. Spitting Image was controversial and attracted huge viewing figures at its peak. It also won several awards such as the BAFTA and the Emmy awards.

How and when did the museum acquire it?

The puppet of Gazza is on loan to us along with other material from a private collector and it has been on display for several years.

The puppet is a great example of football’s influence on television and comedy shows. Spitting Image was hugely popular and at its peak was watched by millions of people. The puppet of Gazza frequently cried in the programme, parodying his tears during the 1990 World Cup semi-final. The puppet brings back memories to many of our visitors of that tournament, but through the eyes of comedy. It is nice displaying objects that show football from a different angle and objects that demonstrate football influences on all aspects of society.

Do we have any other football puppets to see?

We have a number of Spitting Image puppets in the collection such as Gary Lineker, Vinnie Jones, Terry Venables and Eric Cantona. However, they are not all on display at the same time as they are very fragile and need a ‘rest’ in the store from time to time. We also have a Special1 TV puppet of Jose Mourinho on display. Special1 TV was a similar satirical show that focussed solely on football with caricatures of personalities such as Mourinho, Fabio Capello, Wayne Rooney and Arsene Wenger.

What other 1990 World Cup items are on display at the museum?

Our permanent England on the World Stage exhibition that was updated and relaunched in early 2019, tells stories about international football and the England teams. The 1990 World Cup story is told with objects such as a match programme and Pierre Littbarski’s shirt from the semi-final in which England was beaten by West Germany on penalties.