Pelé is a global superstar, a player like no other. Widely regarded as the greatest footballer of all time, his ability on the pitch is still the benchmark of greatness. As the legend turns 80 (23 October 2020) Dickie Felton takes a look at his shirt from the Sweden World Cup. 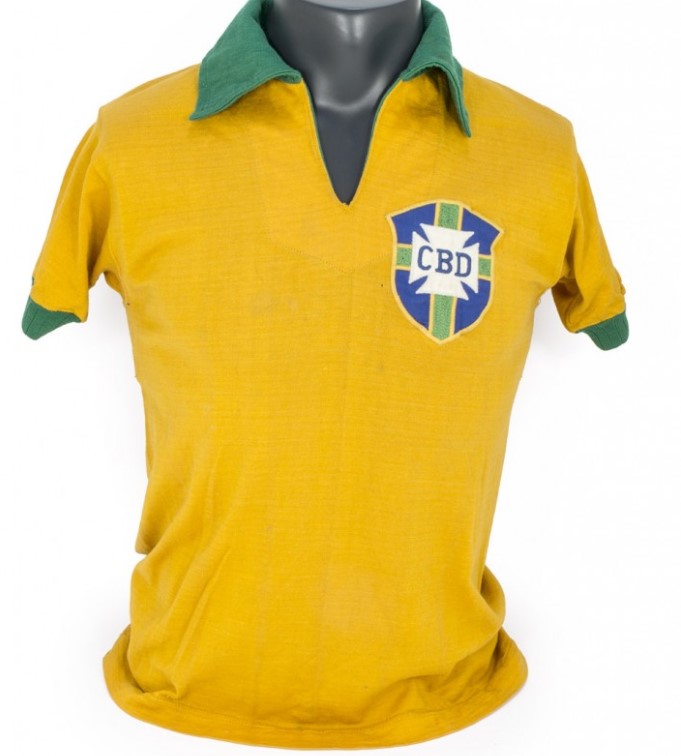 What is this shirt?

This shirt was worn by Pelé in the 1958 World Cup held in Sweden.

He wore it in the final Group 4 game against USSR, hosted in Gothenburg’s Ullevi stadium.

At just 17 years of age, the Brazilian became the youngest player to appear in, score in and win the World Cup final.

The teenager scored his first World Cup goal in a 1-0 victory against Wales to progress to the semi-final, where he scored a hat-trick in a 5-2 win against France.

This was exactly eight years on from the player witnessing his father cry after Brazil were defeated in the 1950 World Cup.

He said: “I was very affected seeing my father cry for the first time when I was nine years old. He was so sad that Brazil lost the 1950 World Cup. That same day, I promised I would win a World Cup for him.”

That’s an understatement! Only Maradona, Messi and Ronaldo come close.

Pelé made his professional debut for Santos at 15. He came on as a substitute and scored his first goal in a friendly win against Corinthians.

He made his international debut in a Copa Roca match against rivals Argentina at the Maracanã. Again, he marked a substitute appearance with a debut goal.

He is the only man to win the World Cup three times and has iconic status around the globe.

What other Pelé objects are there at the museum?

Visitors can see his 1962 World Cup Winner’s medal as well as match programme from the final.

Also on display is the passport he used from 1960-62. This was a period when the superstar travelled extensively with Brazil and club side Santos.

Visitors can see a shirt from the film Escape to Victory, in which Pelé played a starring role. This top is signed by the main man.

What is the world doing to mark his 80th birthday?

Brazilian graffiti artist Eduardo ‘Kobra’ has paid a homage with a mural in the coastal city of Santos. The player has also teamed up with Rodrigo y Gabriela to release a record called Acredita No Véio (Listen To The Old Man).