This stunning sculpture in our collection is by one of the most recognised and influential artists of the 20th Century. Collections Manager Wiebke Cullen takes a closer look at Pablo Picasso’s Footballeur.

Created by the artist just seven years before his death in 1973, this work is set to go on re-display in the near future. In the meantime enjoy its free-flowing form digitally… 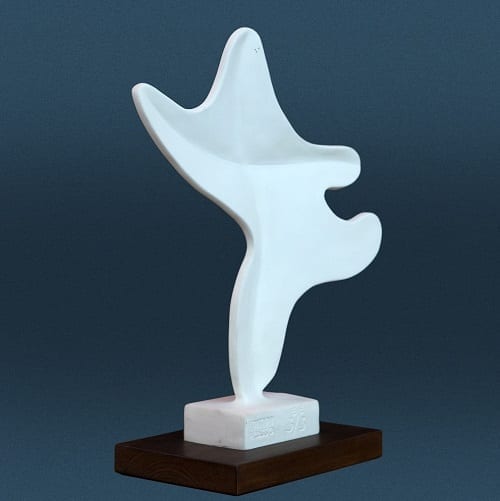 Why is the item so important?

Spanish artist Pablo Picasso (1881-1973) was one of the most interesting and influential artists of the 20th century and a contributor to the Cubist movement. Picasso had a long career during which he was very prolific. He is most known for his paintings, of which he created about 1900, and some of his best-known works are Child with a Dove, Paul in a Clown Suit and Three Musicians.

His other work is a little bit less known, but he has also been a prolific sculptor and ceramicist. Whereas he was a formally trained painter, his sculpting was more personal and experimental. Footballeur shows a footballer with their leg in the air, ready to kick a ball.

Instead of a static piece of work, Picasso could express the energy and movement of the player with the sculpture. When you see the piece, you almost want to imitate the work and copy the action of the ceramic footballer.

Was Picasso a football fan then?

Picasso’s work in general does not feature much football, however, he was interested in sport.

Dr Mike O’Mahony, an art historian specialising in representation of sport, said: “Picasso’s main passions were boxing and bullfighting, but he was ‘moved’ by football. Football emerged for him in the 1960s.

“His interest seems to have been directly motivated by his strong associations with Barcelona, where he spent his formative years before moving to Paris”.

Footballeur shows that Picasso was really interested in the aesthetics of the movement of the players and it is a beautiful artistic representation of an action shot.

How did the National Football Museum acquire the item?

We were offered the work in 2012 on loan from a private collector. It was part of Picasso’s Madoura Collection, which went under the hammer at London auction house Christie’s the previous year.

Many pieces in the collection had remained untouched for decades at the Madoura Pottery Studios in Vallauris, France, where Picasso created them after moving to the country from Spain.

Obviously the museum was absolutely delighted to be able to display a work by one of the most important figures in the history of contemporary art.

Is the sculpture on display?

It was on display just inside to entrance to our main galleries in 2012 and created a great talking point for visitors, who were intrigued by the work as it is so different to the other objects on display.

It was also part of our successful Football is Art exhibition in 2019 next to works of other great artists such as Banksy, Rose Wylie, LS Lowry and Mandy Barker.

At the moment we are planning to update and refresh many areas of the permanent galleries and we are looking for a new place for the work to be displayed so that visitors can appreciate and enjoy it.

Footballers are often described as artists on the field, and there is a lot of similarity between the energy and movement on the pitch and the aesthetics in artworks. Football and art are both able to evoke similar emotions such as joy, despair, anticipation and belonging. Many artists have captured the emotions of a match over the last century.

For display, we are most interested in objects that tell an interesting, and sometimes unknown story, that visitors can engage with.

We want objects to evoke memories of the visitor’s experience with football, whether it is a certain match that they went to as a child, their dreams of being as skilful as their favourite player or the first shirt that they owned.

We want our objects to conjure up a range of feelings – good and bad – and to talk about their emotions and memories with other people in their group or our staff on the galleries. It is the power of the real thing that makes this possible, and people responding with their memories, feelings and conversations make our objects really come alive.

There are also other considerations that we take into account before an object gets chosen for display. The object itself has to robust enough to be displayed in light on a daily basis and in good condition so that it doesn’t get damaged while on display.

If an object is particularly light-sensitive or fragile, we might choose to limit its time on display before it gets rested in our store again. Our collection is being kept in perpetuity for future generations to enjoy so it is our duty to make sure that we look after objects in the right way so they are available for display and research for many more decades.