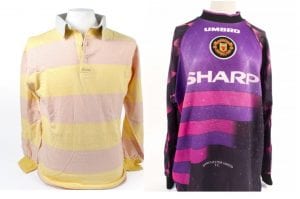 Pink isn’t a colour that appears in football often, but it definitely sticks in the mind when it does.

Historically, pink was often worn by men. In fact, in the 18th century it wasn’t uncommon to see a man sporting a pink suit and it certainly wasn’t seen as an emasculating colour choice.

Here are four fab objects that make you think pink: 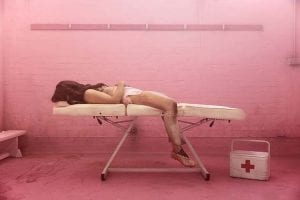 This is a photograph from a series of three by artist Juno Calypso commissioned in response to the Women’s World Cup in 2019.

In her photography Juno Calypso typically explores immaculate aesthetics, with pink always being a primary feature in her work. She styles herself in her photographs, often dressed as a fictional alter-ego named ‘Joyce’.

The image is a change from Juno’s usual pristine and clean staged photographs, as we can see mud and blood, two common factors in football.

This is The Justin Fashanu Cup – from the annual five-a-side tournament organised by The Justin Campaign, an organisation that strives to challenge stereotypes and tackle homophobia in football.

Justin Fashanu began his career with Norwich City. He became the country’s most expensive black football player with his £1 million move to Nottingham Forest from Norwich City in 1981. In 1990, Fashanu shocked the football world when he came out as openly gay to a newspaper, England’s first male professional to do so.

Even now, over three decades later, he remains the only male footballer playing professionally in the top tiers to come out as gay.

Justin Fashanu endured homophobic abuse and discrimination. In May 1998, he committed suicide.

In February 2020, he was inducted into the National Football Museum’s Hall of Fame, on what would have been his 59th birthday. He is widely considered a hero of the LGBT community. 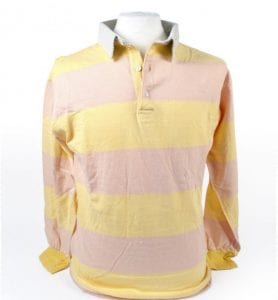 This is Willie Waddell’s Scotland shirt worn against France at Hampden Park in 1949 which the hosts won 2-0. The shirt’s design of striped primrose and pink is derived from the horse racing colours of Scottish aristocrat the Earl of Rosebery, a dominant figure in British racing.

Waddell was a Scottish professional football player and manager. He played for Rangers for the duration of his 16-year career. Waddell made his debut aged 17 and went on to win four league titles, two Scottish Cups, and played 18 times for Scotland.

Waddell managed Rangers and was in charge in 1971 when the tragic events of the Ibrox disaster unfolded as 66 supporters lost their lives in a crush leaving the ground.

Waddell made sure that the club was represented at each of the victim’s funerals. And through his vision, the new Ibrox stadium was created. 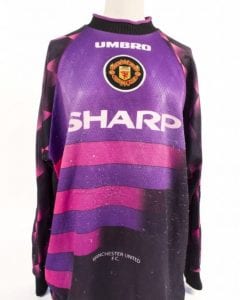 This is a Manchester United Ladies goalkeeper jersey worn during a charity match at Wembley against Newcastle Ladies in 1996.

The baggy fit of this goalie shirt is not unusual for this era. At that time, women’s teams were yet to get their own fitted jerseys. Instead they were given men’s shirts to wear.

It would be four years before the first official Women’s FA Community Shield match would take place.