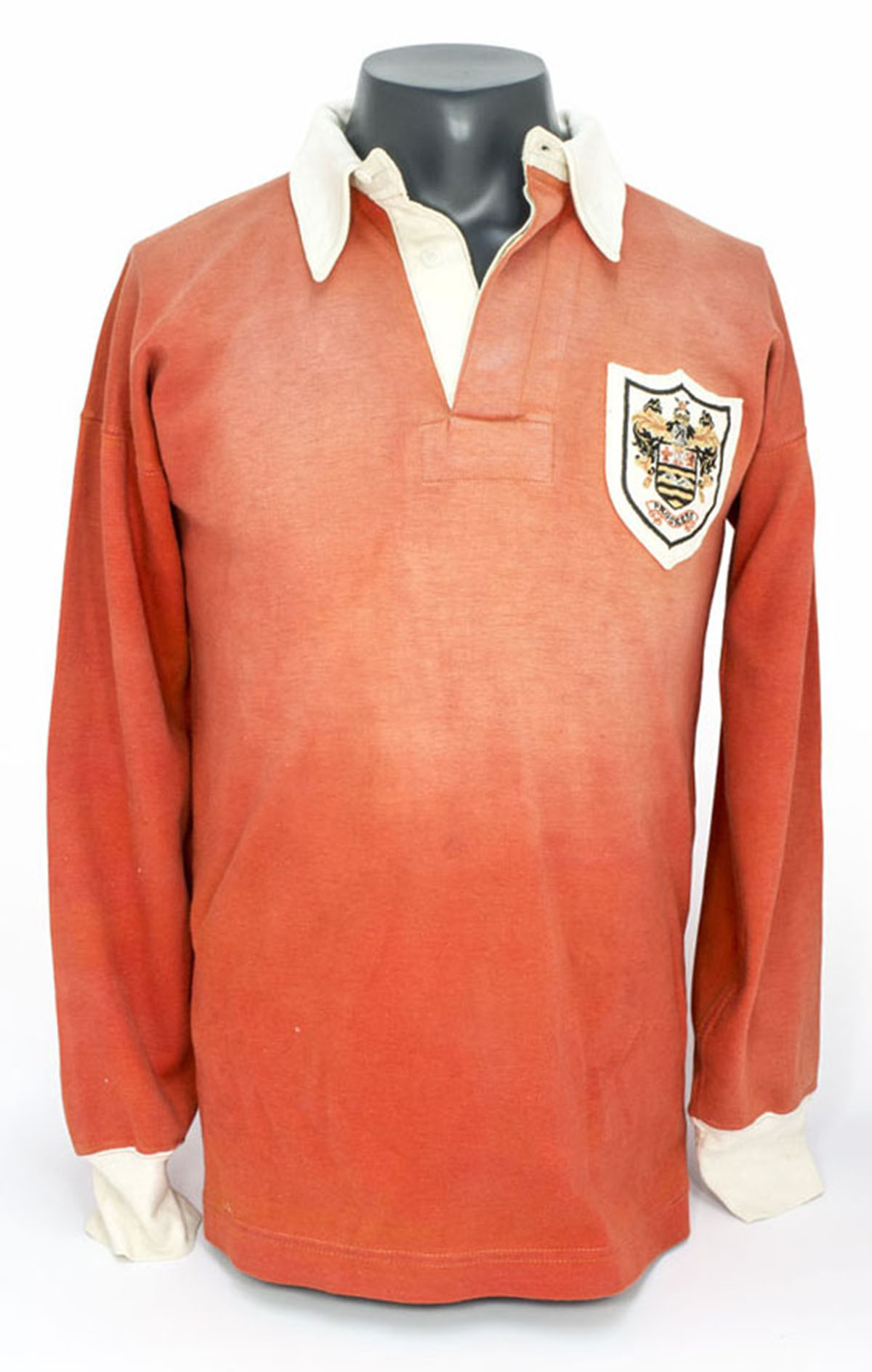 This tangerine coloured long-sleeved shirt with the Blackpool badge on the front and No. 7 on the reverse was worn by Sir Stanley Matthews in the 1953 FA Cup final. You can find out more about the history of the shirt in our Strip! In Focus piece here. 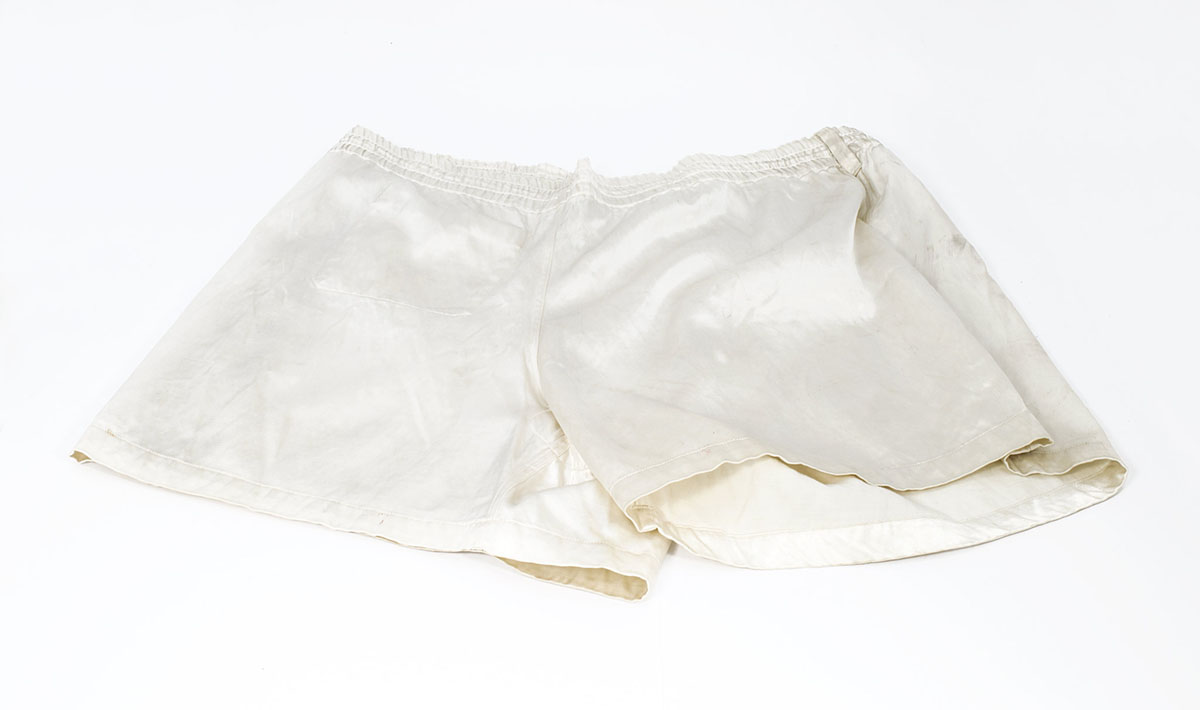 These were the shorts that he wore in the game, and they were made by Bukta. Bukta is a sports clothing brand founded in 1879 in Stockport. Numerous teams, not just English ones, have worn kits that were produced by Bukta, especially during the 70s and 80s. 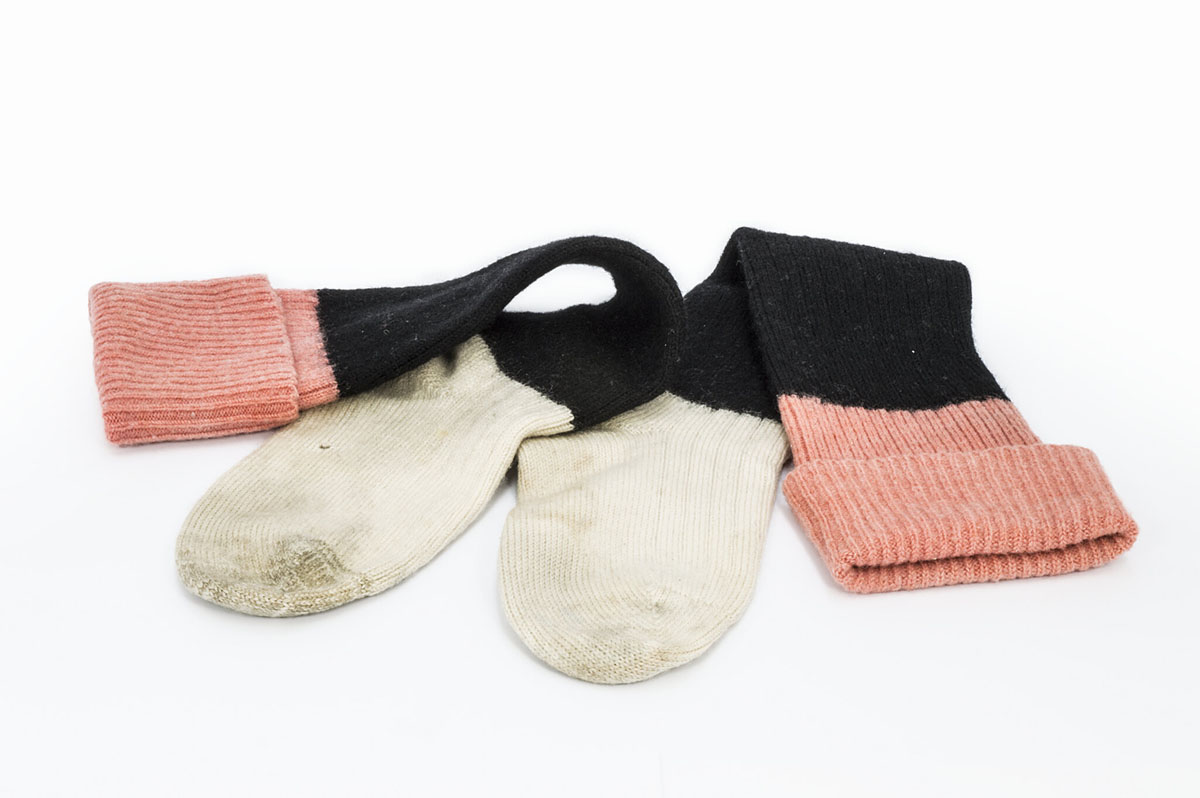 These woolly socks are also the exact ones he wore in this game, and are the colours tangerine, black and white.

What happened in the match?

Lancashire rivals went head to head with Blackpool beating Bolton Wanderers 4-3. In the first half Bolton took the lead, only for Blackpool to equalise, before Bolton pulled one back, securing a lead once again. The second half saw Bolton score another making it three, at which point you would think that they would win the game. Only they didn’t, and Blackpool made a comeback winning the game 4-3. This final was widely publicised and was a real stand-out event, as it was broadcast onto the BBC, and tickets were very expensive.

Why did the match become widely known as ‘The Matthews Final’? 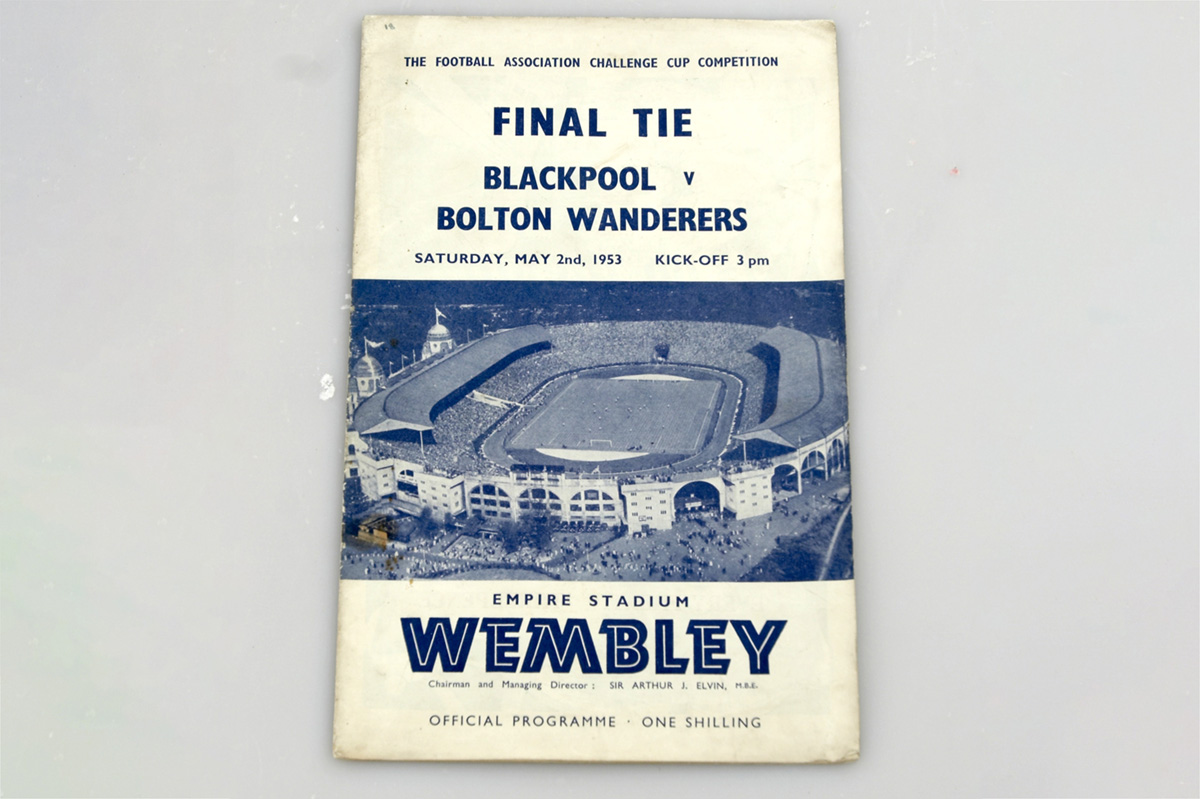 After being in two FA Cup finals and losing both, Matthews finally won this one in 1953 at the age of 38. In 1945 his father was on his deathbed and made Matthews promise two things: to look after his mother, and to win an FA Cup Final. Across the country, the feeling was that this would be Matthews’ last chance at winning the FA Cup, and therefore the people wanted to see him win. Although Stan Motensen’s hat-trick remains the only hat-trick ever scored at Wembley in the competition’s final and the winning goal at 92 minutes came from Bill Perry, it was the winger Matthews that inspired the comeback.

The game is known as ‘The Matthews Final’ because he was instrumental to Blackpool winning the game, and this was his first major trophy.  The final is still fondly remembered today as the greatest ever FA Cup final, due to all the goals and the comeback, but also because of the year that it happened. This year, 1953, was a high point for England, with it being the year of Queen Elizabeth II’s coronation which was the first televised coronation, the British expedition was the first to successfully conquer Mount Everest, the English cricket team won The Ashes for the first time in nineteen years, and it seemed that the country was finally moving into a new era after the wars.

Although Matthews grew up supporting Port Vale, he began his career at Stoke City, playing for their reserves before making his debut against Bury in 1932. His nickname was ‘The Wizard of Dribble.’ He stayed there for 15 more years, making 259 appearances and scoring 51 goals. The war interrupted his time at Stoke, costing him his professional career from the age of 24 to the age of 30, even though there was some unofficial wartime football. During this time he joined the RAF for his war service. 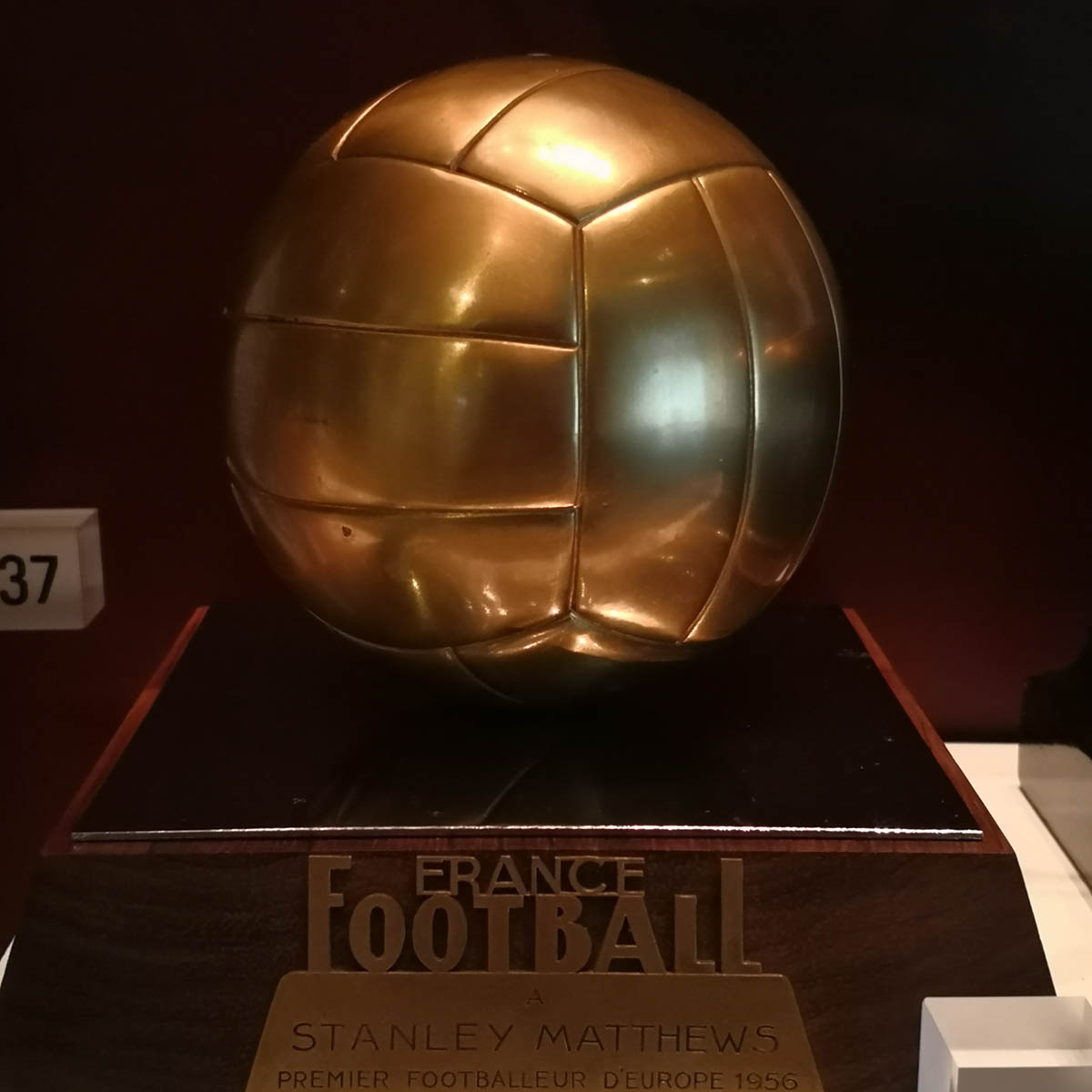 When the football league returned after the war, Matthews spent one season at Stoke before joining Blackpool at the age of 32 in 1947. The 1947-48 season saw Matthews be presented with the inaugural Football Writers’ Association Footballer of the Year award. Over his 14 years at Blackpool, he made 379 appearances and scored 17 goals. In 1956 he was the recipient of the first-ever European Footballer of the Year award, now more commonly known as the Ballon d’Or. During the English off season in 1961 he went on loan to Toronto City and made 14 appearances, before returning to Stoke. These final years of his playing career at Stoke saw him make 59 appearances and score 3 goals. 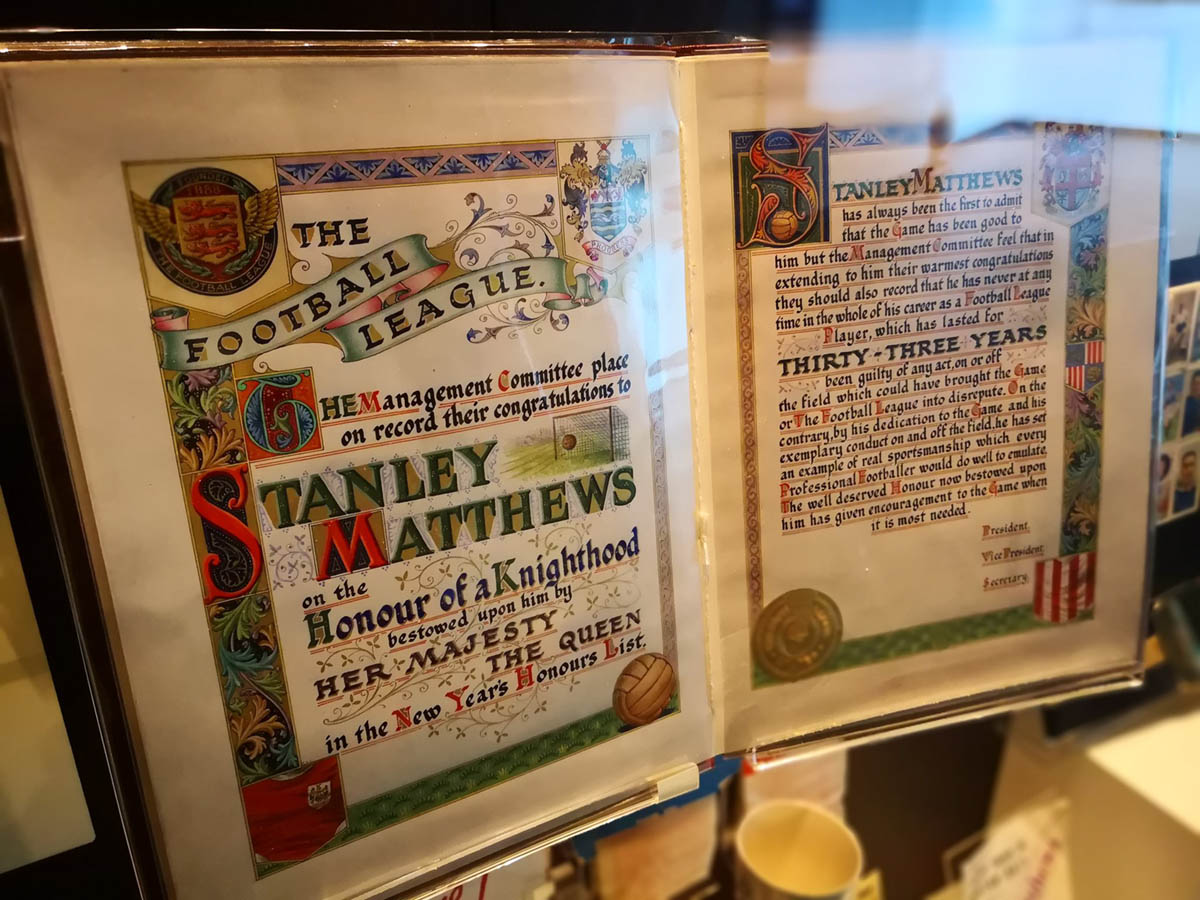 Sir Stanley Matthews was the first professional footballer to be knighted. In the same year he was knighted, he played his last Football League game five days after his 50th birthday, showing just how fit he kept himself. His testimonial was played on April 28th 1965 in Stoke, and many great players from all over came to participate including Lev Yashin, Alfredo di Stefano and Karl-Heinz Schnellinger.

He became manager of Port Vale for a short time, before becoming a coach in various countries across the world.  Whilst in South Africa he ignored apartheid to form a team of black schoolboys in Soweto called ‘Stan’s Men’, and even took them to Brazil in 1975 where they met Pele. For his retirement in 1989 he returned to live in Stoke and became honorary Club President of Stoke City. He passed away in 2000, a year after his wife, and his ashes were buried beneath the centre circle of the Britannia Stadium.

Despite having only won one major competition trophy, the FA Cup, he was one of the greatest to ever play the game, and was recognised for this by him winning the first ever Ballon d’Or, the first ever FWA Footballer of the Year, and being the first footballer to be knighted. Although the war took time away from his playing years, he refused to let that define his career and played until the age of 50.

Following his playing career he coached a new generation, and gave opportunities to kids all around the world that wouldn’t have had them otherwise. Sir Stanley Matthews truly gives the word ‘legend’ in the footballing world its meaning.