When the most famous football in English history came home… Calendar

It’s one of the most important objects in the National Football Museum collection – the ball from the 1966 World Cup Final.

Visitors can see this crown jewel of English sporting history when the museum reopens from 27 May 2021.

But how did the museum acquire the ball? And how did it make an appearance at a bumpy Essex playing field before it finally came to rest in our galleries two decades ago?

Andy Lines, Daily Mirror chief reporter, recalls the time his newspaper saved the 1966 World Cup Final ball for the nation – and set up an impromptu rematch on a village field: 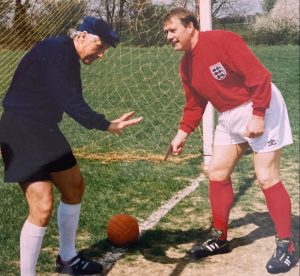 Geoff Hurst, Hans Tilkowski and the iconic 1966 World Cup final ball have only ever been together – at the same time – on two football pitches.

The first was on 30 July 1966 at Wembley for the World Cup Final. The second was on 28 April 1996 at the quaintly named “Calves Pasture” ground of Essex village side Hatfield Heath FC.

It was on this pitch where England’s hat-trick hero and the West German goalkeeper Tilkowski were re-united with the famous orange ball. They came together to re-create the “did it cross the line” goal.

It’s a story that’s never been told before – how this little club managed to become a small slice of football history. The story started a week earlier in April 1996.

Ahead of the Euros the Daily Mirror had tried to track down the whereabouts of 1966 ball which wasn’t – as tradition dictates – given to the hat-trick scorer after the game. They discovered that West German midfielder Helmut Haller had walked off with the ball after the final whistle.

Returning home he left it in his cellar and had to ban his son from playing with it in the garden.
Fast forward 30 years … and after a bidding war with other newspapers Haller sold the ball to the Mirror and they triumphantly brought it back to England.

With Hurst and Tilkowski onboard they wanted to re-create the famous goal. Originally they chose a pitch in Brentwood but someone tipped-off a rival newspaper. So the Mirror called Hatfield Heath FC and 30 minutes later Hurst’s limo was roaring up the cul-de-sac of Cox Ley to the remote ‘Calves Pasture’ pitch.

It’s no secret why the ground was named. Just 10 years earlier the the club had converted the field – to the exact same size as Wembley – after it had been used for decades for grazing cattle.

Hurst and Tilkowski got changed into their respective national kits in the Heath’s humble changing rooms. As they emerged bemused Sunday morning dog walkers watched in astonishment wondering what on earth the world famous players were doing there. 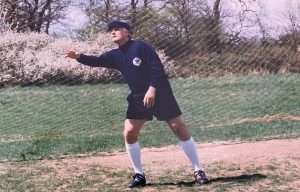 They then spent an hour chatting and laughing as they recreated the goal. Both happily posed for pictures and their place in Hatfield Heath FC’s history was sealed forever.

As he left, Hurst stopped to thank the club’s committee for their help saying: “That’s a really lovely pitch.” His driver chipped-in: “Looks like an ankle-breaker to me!”

The ball was later loaned to the National Football Museum courtesy of Mirror Group, Eurostar and Virgin and has been one of its most popular objects among visitors for more than two decades.

You can see the 1966 World Cup Final ball alongside Geoff Hurst’s hat-trick shirt and replica Jules Rimet trophy when the museum reopens from 27 May. Book your tickets here.

*Andy Lines is chief reporter at the Daily Mirror. He is also Hatfield Heath FC club historian and scored a record breaking 75 goals in one season for them back in 1986/87.