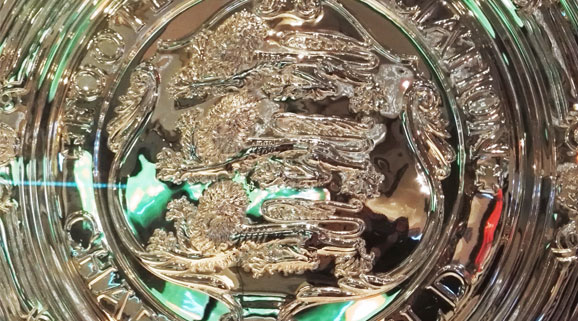 A rebuilt version of the Charity Shield, painstakingly crafted by the FA's silversmiths, has gone on display at the National Football Museum ahead of being auctioned for the Bobby Moore Fund.

In recognition of the 50th anniversary of 1966, silversmiths Thomas Lyte, who built the latest FA Cup trophy in 2014 among a long list of sport's most famous trophies, have re-built the retired Charity Shield. 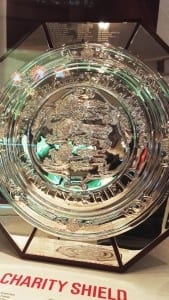 Charity Shield on display at the National Football Museum

The fourth edition of the Charity Shield, a unique object in its own right, has been handcrafted by an expert team of silversmiths in London to raise money for the Bobby Moore Fund through an auction in October. The core, circular element of the 2002 shield serves as the foundation for the re-build, which has been designed, made and restored by Thomas Lyte.

The new trophy is hand spun from 4.2kg Sterling 925 Silver. Standing an impressive 58cm squared, the trophy underwent the painstaking process of casting, hand chasing, hand engraving and polishing, with over 130 craft hours used to make this stunning piece. It is a perfect replica of the 1908 trophy which remains in The FA’s possession at Wembley.

The shield went on display at the National Football Museum in the week following Manchester United's record 21st victory in the competition (now known as the Community Shield). This piece of craftsmanship is not only an iconic symbol of sportsmanship and the game of football, but will provide vital fundraising for the Bobby Moore Fund, when it goes to auction on Monday 10th October, with all of the proceeds going towards fighting Bowel Cancer.

For any further information, or to speak to someone about attending the auction event, please contact the Bobby Moore Fund at BMFauction@cancer.org.uk