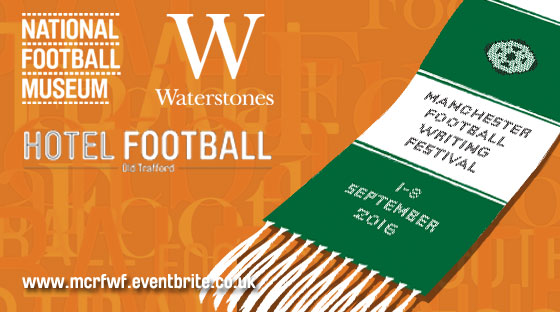 The 3rd Manchester Football Writing Festival, in association with National Football Museum, Hotel Football and Manchester Waterstones Deansgate is set to return with another great line-up of events from Thursday 1 to Thursday 8 September.

The Blizzard Live at the National Football Museum.

The festival is quickly building a reputation as a home to intelligent debate, industry insight and unique perspectives for fans of the beautiful game. This year the festival continues that trend with big names discussing the big issues and ideas in football today.

Festival favourites The Blizzard get things underway on Thursday 1 September at the National Football Museum. Chaired by editor Jonathan Wilson, the intelligent football quarterly will have a panel of its finest contributors uniquely dissecting football matters big and small.

The big hitters from Guardian Football Weekly Live! return for a 3rd piece of Manchester Football Writing Festival action. Host James Richardson and Producer Ben will be joined by podcast regulars Barry Glendenning, Paolo Bandini and John Ashdown for a night of puns and punditry at the Royal Northern College of Music on Friday 2 September.

Jonathan Wilson takes another bite of the festival on Saturday 3 September, visiting Waterstones Manchester Deansgate to cover the in depth history of football in Argentina as explored in his new book Angels With Dirty Faces.

Back at the National Football Museum on Monday 5 September, three brilliant authors with unique takes on the travails of England football teams join forces. Henry Winter (Fifty Years Of Hurt: The Story of England Football & Why We Never Stop Believing), Rory Smith (Mister: The Men Who Taught The World How To Beat England At Their Own Game) and Carrie Dunn (The Roar of The Lionesses: Women’s Football In England) will be joined by host Caroline Barker for Fifty Years Of Hurt, an essential group therapy session for England supporters. What’s gone wrong? Where are the positives? And where do the Three Lions go next?

Waterstones Deansgate is the venue for the ever-popular Manchester panel at this year’s festival on Tuesday 6 September. The Times’ Oliver Kay (whose new book Forever Young: The Story of Football’s Lost Genius) leads a panel exploring the importance of young, homegrown players in this football-mad city. Ian Marshall, MEN Head of Football Alice McKeegan, The Mirror’s Simon Mullock, ESPN’s David Mooney and Simon Wadsworth take up a debate that’s sure to interest Messrs Mourinho and Guardiola among others.

The festival welcomes the team from OPTA to Hotel Football on Wednesday 7 September for @OptaJoe: Revenge Of The Nerds; an in-depth look at the overlapping worlds of stats, social and soccer. The data presented by OPTA is changing the way football is viewed, and the way the team behind accounts like @OptaJoe inject humour and personality into football coverage proves you don’t need to sacrifice quality for brevity. Venue and details TBA for this fascinating evening with one of football’s 21st century game changers.

Bringing the festival to a close is a fantastic line-up from Women In Football, who present this year’s ‘How To Get Ahead in Football Journalism’ masterclass at Waterstones Deansgate on Thursday 8 September. BBC Sport’s Jacqui Oatley chairs a panel featuring Shelley Alexander (Editorial Lead for Women’s Sport at the BBC), Caroline Chapman (BBC Sports Interactive), Conor McNamara (5 Live and Match Of The Day commentator), Vikki Orvice (The Sun), and Jo Tongue (606 editor).

Further speakers and announcements will be made in the coming days, with tickets for all events available from www.mcrfwf.eventbrite.co.uk. For the first time, a 'festival pass' will be available, giving access to 6 Manchester Writing Festival events (excluding Guardian Football Weekly Live) for £45. Follow @McrFWF on Twitter for more news and information about the festival.

Powered by Eventbrite
Back to News
Tweets by @FootballMuseum