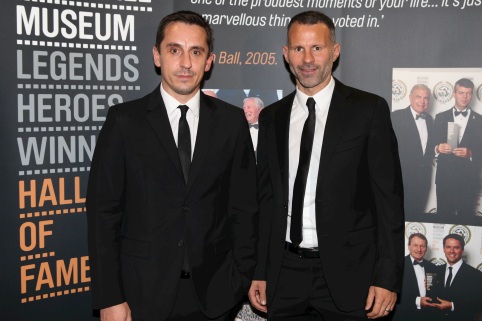 ANOTHER nine football legends were inducted into the National Football Museum Hall of Fame at a prestigious awards ceremony held at the museum on 14 October.

Manchester United’s “Class of 92” graduates Gary Neville and former teammate Ryan Giggs were both inducted, with Giggs collecting his award from Brian Kidd and then presenting the award to Neville. On receiving his award Giggs said: ‘I had a fantastic manager, I was lucky in many respects. He went on to say; ‘It’s not the winning you remember, it’s the losing.’  Gary Neville commented: ‘We had an amazing opportunity as kids. It just doesn’t feel right to be in any Hall of Fame. I feel delighted and privileged to be amongst such greats as there are in this room tonight.’

Tottenham Hotspurs midfielder Alan Mullery, who played a key role in the club's 1967 FA Cup win and later lifted the League and UEFA Cups as club captain was present to receive his award from former Spurs winger Cliff Jones with Jones saying ‘It’s a privilege and a pleasure to honour you with this award. It’s thoroughly deserved.’

Gary Davies, a hero of the England Cerebral Palsy team who continues to dedicate his life to football through youth team coaching, received his award from 2013 Hall of Fame inductee David Clarke saying ‘It’s slightly surreal; words can’t describe it. I can’t believe you play for your country and then you end up in the Hall of Fame sitting here with my heroes.’ 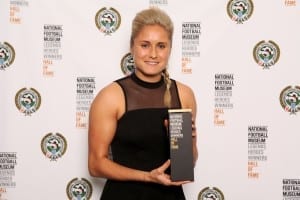 Faye White who spent an incredibly successful 17 years at Arsenal Ladies was unable to attend due to illness. However England and Manchester City Captain Steph Houghton, there to accept the award, paid fitting tribute to Faye saying it was; ‘A privilege to collect this award for a fantastic player, professional, and leader. She is a real role model for the younger girls… She was a trailblazer of the women’s game.’

Wales and Swansea ‘Golden Boy’ Ivor Allchurch and Bob Crompton, who played over 500 times for Blackburn Rovers in the early 20th century were also inducted.  Stuart Pearce was unable to attend; his award was accepted by Mike Summerbee.

Inductees are chosen by a panel featuring some of the biggest names in football including the Museum’s President Sir Bobby Charlton, Vice President Sir Alex Ferguson, Gordon Taylor and Mark Lawrenson.

To qualify for nomination players must have finished their career or be aged over 30 and have played or managed in the English league for at least five years.