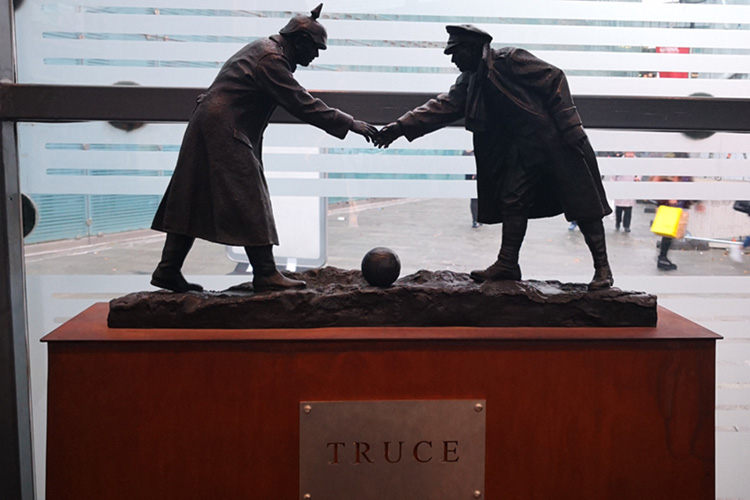 Remember those footballers who fought during the First World War with the National Football Museum this centenary weekend.

On Sunday 11 November, the National Football Museum will be remembering the footballers who fought for our country. Pay your respects with a two-minute silence at 11am, and learn more about the players who traded touchlines for trenches on our Hall of Fame screen throughout the day.

The beautiful game is inextricably linked to one of the world's most devastating conflicts. Stories of the Christmas Day truce in no man's land feature football at its core, with tales of opposing armies downing weapons and playing impromptu matches firmly ingrained in public consciousness.

Hundreds of players signed up to the cause, with the 17th and 23rd Service Battalions of the Middlesex Regiment becoming known as the 'Football Battalions', though a number of players enlisted elsewhere.

Burnley's Eddie Moscrop was a member of the Burnley side which lifted the last pre-war FA Cup, edging out Liverpool in April 1914. A conscientious objector, the outside left joined the Royal Army Medical Corps later in the war, serving in France and Salonika. His 1914 shirt and medal are preserved in our extensive collection.

Eddie survived the war and resumed his career with the Clarets, but many weren't so fortunate. Bradford Park Avenue's Donald Simpson Bell is to date the only professional footballer to have received the Victoria Cross - the most prestigious award in Britain's military honour system. He was killed in action at the Somme, just five days after receiving the VC.

We are proud to tell Donald's story and display his medal in our dedicated football and war exhibit. The display, partly funded by donations from 2014's The Greater Game exhibition, also features prints, postcards and propaganda games from the inter-war years.

The display also commemorates the life and actions of Walter Tull. The half-back had racked up over a century of appearances with Northampton Town before the outbreak of war, and served with both Football Battalions. Promoted to the rank of sergeant, Tull became the first black officer to lead white troops into battle, but was killed by machine gun fire in March 1918.

A portrait of Tull, entitled 'Civilian, Footballer, Soldier', can also be found in Colin Yates' temporary exhibition, Black Looks, featuring the pioneering black footballers of the past century.

Football was suspended from 1915 onwards, giving unexpected rise to the women's game. When the men left for war, the women filled their roles in factories, railways and farms, and were encouraged to exercise during their working days. Women's football became more popular and organised thereafter. Teams like Preston's Dick, Kerr Ladies grew in fame and stature, drawing in substantial crowds during the inter-war years and beyond.

Learn more about the Dick, Kerr Ladies on our galleries, or online as part of our #HiddenHistory project: https://unlockingthehiddenhistory.wordpress.com/2017/12/20/100-years-of-the-dick-kerr-ladies/