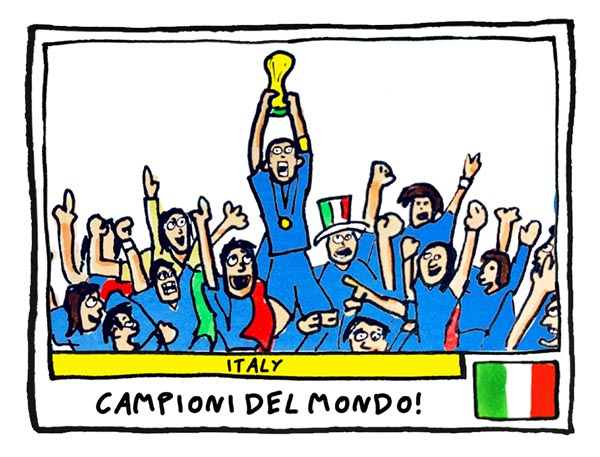 Much like in 1982, Italy headed into a major tournament off the back of a major scandal – and, much like 1982, they turned negative attention into positive results.

Controversy of a different nature followed the Azzurri through the tournament. De Rossi earned a straight red for an elbow on the USA’s Brian McBride, Marco Materazzi was dismissed for an ugly tackle, while a controversial penalty saw the Italians past Australia in the second round.

Marcelo Lippi’s men would save the most infamous moment for the final – more on that below – before winning their fourth World Cup title on penalties, courtesy of Fabio Grosso’s converted spot kick. 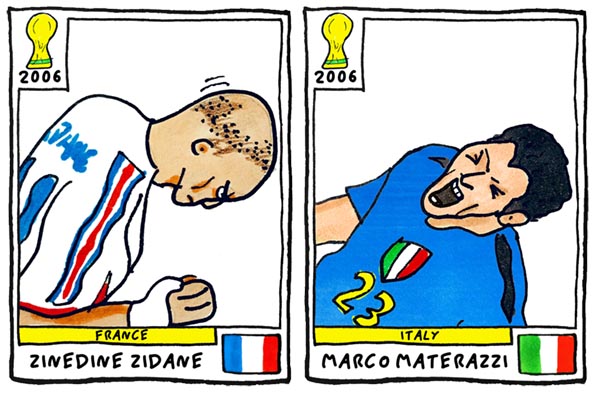 Irony can be such a cruel mistress.

Zinedine Zidane was far from his best in 1998, turned on the style in the final and won his country the World Cup. Eight years later, he was at the peak of his powers throughout, pulled the strings in the final, then threw it all away in the final ten minutes.

In Zizou’s defence, he was undoubtedly provoked by unsavoury Inter Milan outhouse Marco Materazzi. In what is perhaps the most unexpected moment in World Cup history, Zidane reacted to Materazzi’s uncouth comment about his sister with a perfectly executed headbutt – not on the brow of the centre-half, but buried deep in his chest.

In the aftermath, the coup de tête was analysed more than the game itself. The France captain trudged past the waiting World Cup, not even glancing at the silverware as he headed towards the tunnel: less than half an hour later, Materazzi was bouncing around with a winner’s medal around his neck.

Football is not always fair. 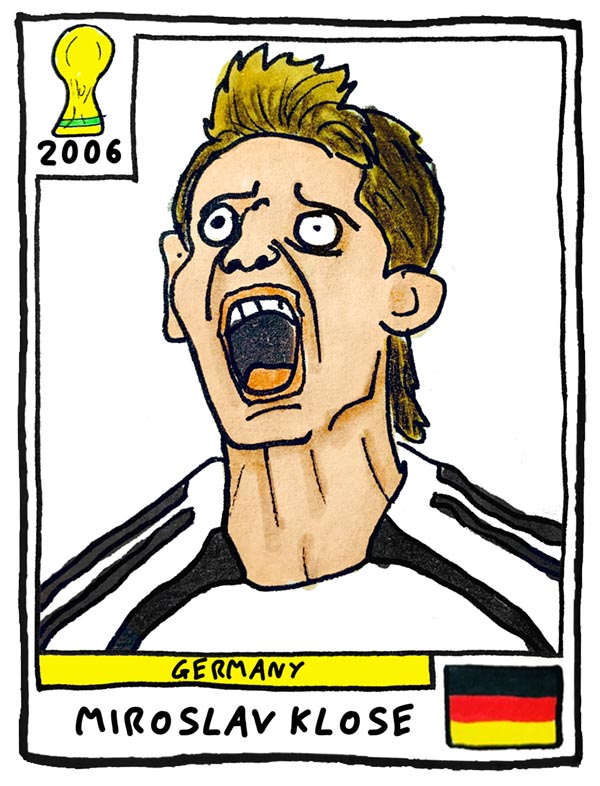 Having scored five goals (all with his bonce) in Korea-Japan, Miroslav Klose matched that goal tally at his home tournament.

This time, the Werder Bremen hitman scored the majority of his goals in the group stages, scoring a close-range brace against Costa Rica, then repeating the feat against Ecuador. The last of his five goals came in the final ten minutes of the quarter-final against Argentina, powering in a trademark header to level late on.

That was the last of Klose’s goals at the tournament, as he drew a blank in the semi defeat to Spain, but it was enough to win the (admittedly low-scoring) Golden Boot competition. 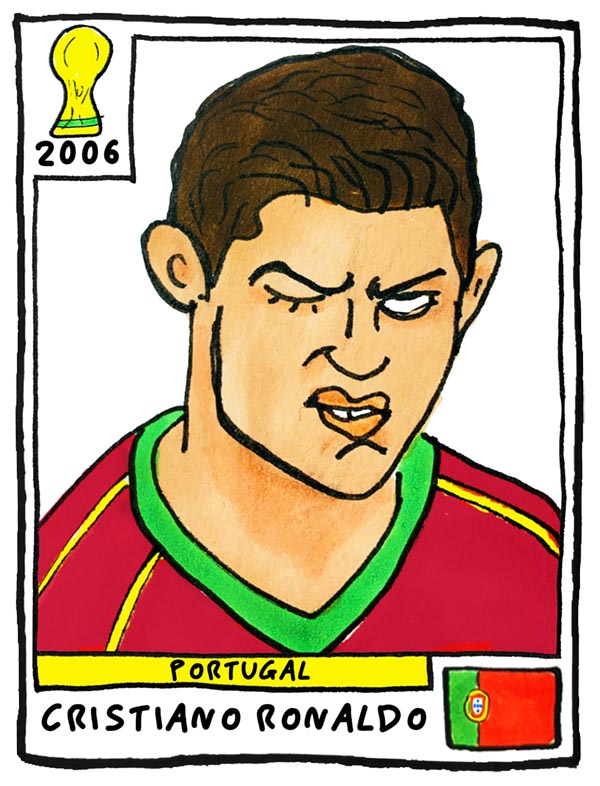 In a hot-blooded quarter-final tie between England and Portugal, Wayne Rooney and Ricardo Carvalho engaged in a right old tussle. The centre-half somehow managed to foul Rooney three times simultaneously: the Manchester United forward responded with a misplaced (or well-placed) stamp on Carvalho’s salsicha.

United teammate Cristiano Ronaldo was on the scene in a flash, petitioning ref Horacio Elizondo to reach into his back pocket. Elizondo duly obliged, and England had to play without their key attacker for half an hour (then another half an hour of extra time).

In the immediate aftermath of Rooney’s dismissal, Ronaldo was caught on camera winking to the bench, stoking the ire of England fans watching on television. England went on to lose on penalties – only Owen Hargreaves converted his spot kick – and Ronaldo became enemy number one at grounds across the country. 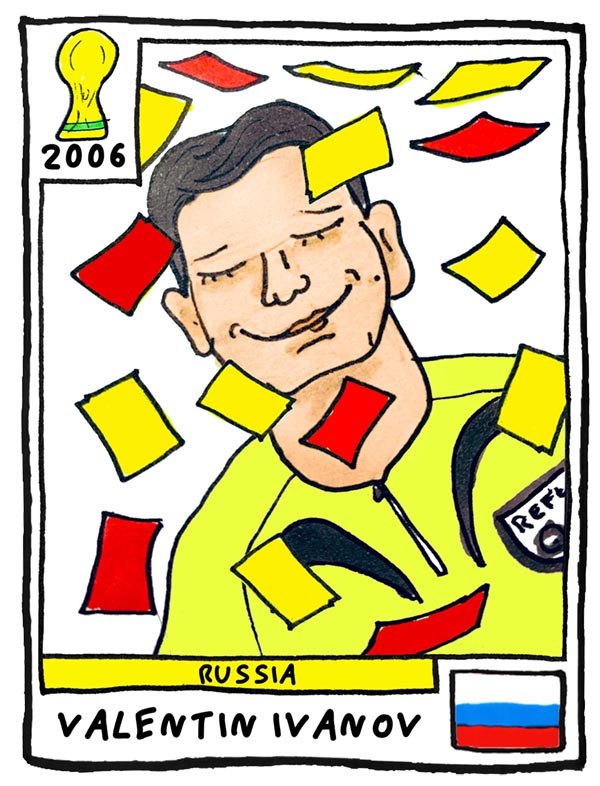 Battles don’t normally have referees, but this one did.

Valentin Ivanov was the man in the middle for the Netherland’s (literal) clash against Portugal. Over the course of ninety minutes, he dished out cautions to Ricardo, Valente, Costinha, Maniche, Figo, Deco, Petit, Boulahrouz, van Bronckhorst, van Bommel, Sneijder and van der Vaart.

In the Russian’s defence, many of the players didn’t give him a great deal of choice: the game was marred with rough fouls, shocking tackles and the occasional melee. Boulahrouz’s early foul on Ronaldo could have been a straight red on its own, while Figo was lucky to stay on the field after headbutting van Bommel.

Amidst the various skirmishes breaking out across the pitch, Maniche avoided the flying limbs and the violence to score the game’s only goal. Technically, Portugal won, but there are no winners in war. At the Battle of Nuremberg, both nations let football down. 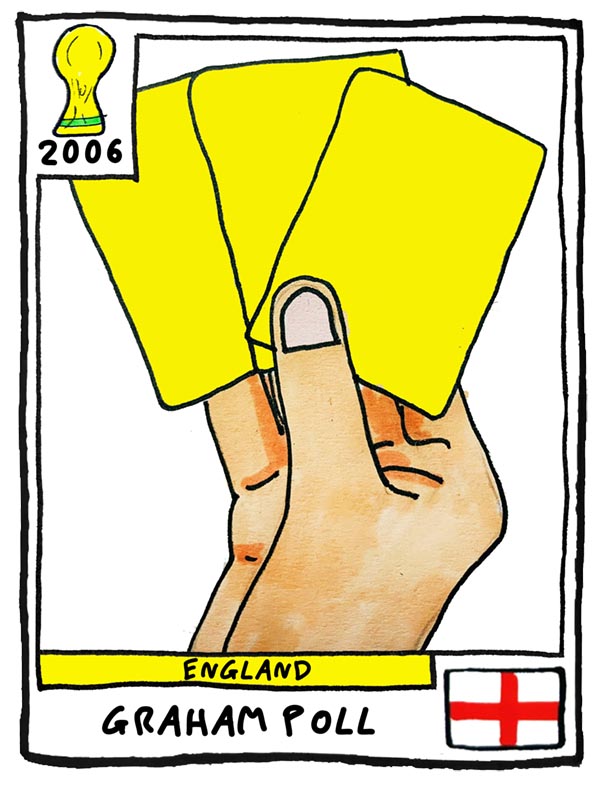 Ivanov’s performance may have been criticised (by Sepp Blatter, amongst others) but at least he got his cards-to-players ratio correct. Had Graham Poll been in charge at Nuremberg, it might have been a different story.

Considered one of England’s finest officials, Poll was chosen as our nation’s representative in Germany. In the final round of Group F games, Poll took charge of Croatia v Australia. Canberra-born centre-half Josep Simunic was booked just after the hour mark, then again for a late tackle in the 90th minute. However, when registering the second caution, Poll went off Simunic’s Aussie accent rather than his shirt colour – and accidentally registered the booking to his corresponding number, Australia’s Craig Moore. What a drongo.

Despite being allowed to remain on the pitch, Simunic was determined to get his red card, having a pop at Poll after the final whistle to ensure he received his belated marching orders. In doing so, the 28-year-old became the first and only player to receive three yellow cards in one World Cup game.