Object of the Week: The match which marked a new era for women’s football Calendar

As the Women’s Super League kicks off this weekend (3-5 September 2021), Uma Ghelani takes a look at a unique object which heralded a new era for women’s football. 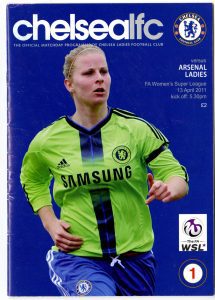 This is the matchday programme from the opening fixture of the brand new Women’s Super League (WSL) which took place a decade ago.

The game marked a new era for the women’s game as Chelsea and Arsenal kicked off in front of live TV cameras on 13 April 2011.

Arsenal won 1-0 with Gilly Flaherty’s goal from a corner taken by Kim Little in the 35th minute  separating the sides.

The match showed the quality of the teams on show and the league has developed in stature ever since.

Arsenal went on to win the league that term – becoming the very first champions of the inaugural WSL.

And this match programme mirrors what’s happening this weekend?

Yes. Arsenal and Chelsea will meet again on Sunday lunchtime as the WSL 21/22 season gets underway.

The match kicks off on Sunday at 1230 – a match televised on Sky.

In a way, it is a full circle moment for the WSL, which recently celebrated it’s 10th anniversary.

What happened in their previous meetings in the WSL?

These historic statistics tell us that the two teams are quite evenly matched, but Chelsea have edged slightly ahead in recent times. That could all change, as the new season awaits.

Who are the favourites for this weekend’s clash?

Arsenal v Chelsea is one of the most eye-catching of the opening fixtures.

Chelsea have been reigning champions for two consecutive seasons, and are set to begin defending their title against their biggest London rivals.

Last season Arsenal finished third, but they have a new manager and have already defeated Chelsea 2-1 in a pre-season match.

The Gunners will be ready to try and deliver an early blow to Chelsea’s title defence campaign.

The big change is that for the first time ever, 18 matches will be broadcast live on BBC, and 44 games on Sky Sports.

Some of the big clubs have new managers. Manchester United’s Casey Stoney stepped down at the end of last season with Orlando Pride’s Marc Skinner recruited to take her place.

Arsenal’s manager Joe Montemurro also decided to leave and the club announced Rosengård’s Jonas Eidevall has joined in his place.

The Olympics delayed many players in joining pre-season training and games, meaning there could be challenges for some teams as they try to solidify the way they work together.

With this being the landscape, it will be a season like no other as women’s football in this country continues to grow and develop.

This summer the National Football Museum opened a new display to some of football’s first female superstars.