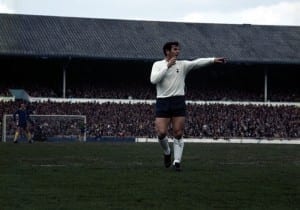 Alan Mullery was a quick central midfielder, who made his debut as a youngster for Fulham in 1958.  He played the majority of his career at Tottenham, making over 300 appearances for Spurs, before re-joining Fulham for the latter part of his career in 1972.  Mullery won 35 England caps and was part of the 1970 World Cup squad.

Mullery made one shy of 200 appearances for Fulham, before joining Tottenham in 1964 for a fee of £72,500.  He followed in the footsteps of Danny Blanchflower in Spurs’ midfield after the retirement of the North Irishman in April of that year.

He won three honours whilst at Tottenham; the FA Cup in 1967, League Cup in 1971 and, a year later, the UEFA Cup, following a 3-2 aggregate win over Wolves in which Mullery scored the decisive goal.  In all, Mullery made 312 appearances for Spurs in eight years, scoring 25 goals.

Mullery won his first cap for England in December 1964, though it took two and a half years before a second was awarded, for a 2-0 victory against Spain.  He played during the 1968 European Championship but was sent off in the semi-final (a 1-0 defeat to Yugoslavia), the first England player to be red-carded.

In the 1970 World Cup finals, defending champions England progressed to the quarter-finals, where they met West Germany and despite leading 2-0, were beaten 3-2 after extra time.  Mullery scored his only England goal during the match.

After retiring from playing in 1976, Mullery went into management.  His first job was at Brighton and Hove Albion and in five years at the club, Mullery achieved two promotions and kept the Seagulls in the First Division.

He later managed Charlton, Crystal Palace and QPR before returning for a second spell with Brighton.