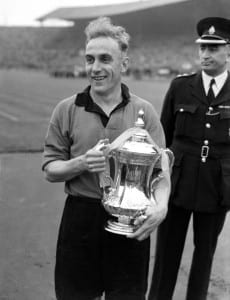 The first player to win 100 caps for England was once rejected by his only club for being too small. Billy Wright got a reprieve and went onto become the captain of Wolverhampton Wanderers during the club’s most successful period.

Starting out as a right-half (or right-sided midfielder), injuries to colleagues at club and international level saw him converted to the centre-half position. Despite being only 5ft 8inches high, unusually small for this position, he excelled for both club and country. Primarily a defensive player, he combined a keen sense of anticipation with energy, determined tackling and considerable jumping power to become a powerful defender.

These qualities weren’t immediately obvious in the young lad from Ironbridge, Shropshire who joined Wolves in 1938. The then-manager Major Frank Buckley apparently thought Wright was too small for the game, but saw enough in the young player to hand him his debut as a 16 year old in a wartime match in 1939.

Made captain in 1947, he led Wolves to the FA Cup in 1949 and First Division league titles 3 times in the 1950s. Under manager Stan Cullis, Wolves became one of the leading clubs of the day and rivals to Manchester United. In many ways Wright epitomised the club's qualities and style of play under Cullis; determined, energetic, selfless and direct.

A quiet temperament and undemonstrative playing style led some to question his suitability as captain at both club and national level. Wright himself preferred to lead through example. As he once explained, "I decided early on that captaincy is the art of leadership, not dictatorship. Respect is the hardest thing for a captain to come by and the easiest to lose. I never changed my mind about this."

These qualities particularly appealed to England manager Walter Winterbottom who selected Wright for all his 105 caps. The 100th came against Scotland in 1959 and saw Wright carried aloft by his teammates around Wembley. In the same year he was awarded a CBE for his services to football.

Retiring in 1959, he became manager of England’s Under-23 and Youth sides before being manager of Arsenal between 1962 and 1966. He died in 1994, shortly after a stand at Wolves had been renamed in his honour.