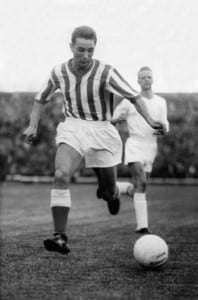 Brian Clough in action for Sunderland 9 August 1961. Pic via Mirrorpix.

Arguably the most successful, almost certainly the most outspoken, English manager of his generation, Brian Clough's desire to win was first seen in an all-action playing career ultimately cut short by injury.

Born in Middlesbrough, Clough made his professional debut for his home team club in 1952 aged 17 as a centre-forward.

A prolific striker, he was to be Boro's top scorer for three consecutive seasons. In total he scored 204 goals in 222 games, winning two England caps while still playing for the Division Two side, against Wales and Sweden in 1959. It was at Middlesbrough he met goalkeeper Peter Taylor who would later become a close friend and colleague in his managerial career.

Clough moved to local rivals Sunderland in 1961 where he scored 63 goals in 74 matches before suffering an injury in a match against Bury at Roker Park in December 1962. Clough spent two years attempting to regain fitness, but would play only 3 more matches, before retiring aged 29. 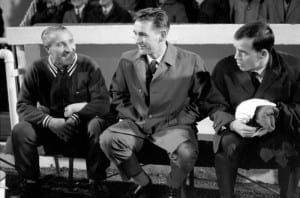 His managerial career began in 1965 when he was asked to manage Hartlepools United (now Hartlepool). Aged just 30 he was the youngest manager in the Football League.

However it was Cloughie’s success at Midlands club Derby County and local rivals Nottingham Forest that really made his name.

Clough moved to Derby in 1967, taking Peter Taylor with him as Assistant Manager. Prior to his arrival County had been in the Second Division for over a decade. It was here that Clough really got into his stride and earned his infamous reputation as a hard but fair manager. During his first season he started to lay the foundations for the club’s future success, signing players including Roy McFarland and John McGovern. Of the players he inherited he only saved four: it’s even rumoured he sacked two tea ladies he overheard laughing about the club after a defeat. 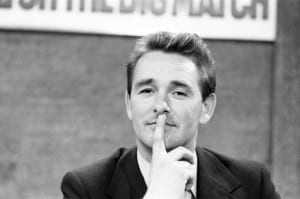 Although somewhat controversial, and often at odds with his chairman and board, his management helped the club win promotion to the first division in 1969, followed by their first Division One Championship in 1972. His players attributed their success to Clough’s role as a coach before manager, he was one of the first “tracksuit managers” – always at the training ground.

Away from the pitch, Clough's forceful personality, sharp wit and often good humour put him in the public eye. His appearances on chat shows as well as in the football media made him a household name; assertions like "I wouldn't say I'm the best manager in the world, but I'm in the top one..." may have made him a popular figure with the media and TV viewers, but meant he often ruffled feathers in the football world.

Clough's frequent outspoken comments against football's establishment eventually led to him falling out with the board of directors at the club, and following brief periods at Brighton and Hove Albion and Leeds United, Clough and Taylor went on to manage Derby’s local rivals Nottingham Forest in 1975. 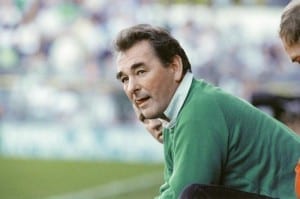 Brian Clough manager of Nottingham Forest Football Club watching his side's match against Millwall from the dug out.
25th October 1988. Pic via Mirrorpix

During his 18 years as manager (with Peter Taylor as his assistant until 1982) he led Forest from 6th from the bottom of Division Two (January 1975) to winning the First Division Championship in 1978, followed by two consecutive European Cup wins in 1979 and 1980 and four League Cup victories. This has been argued as one of the greatest managerial feats in the English Football League's history to date. He was awarded Manager of the Year in 1978.

He was awarded an OBE for his services to football in June 1991.

Clough was spoken of as 'the greatest manager England never had', as he was overlooked for the national team job despite being one of the league's most successful managers. He was in fact interviewed for the job in 1977 and 1982. His qualifications were never in doubt, but it seems his outspoken views on the way football should be played, and run, ultimately counted against him.

Clough himself summed up the headache facing those who appointed the England manager: "I'm sure the England selectors thought if they took me on and gave me the job, I'd want to run the show. They were shrewd because that's exactly what I would have done".