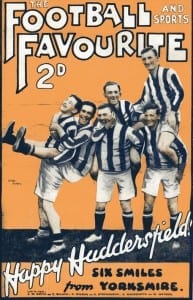 Clem Stephenson (centre) and Huddersfield teammates on the cover of The Football and Sports Favourite, circa 1925

Clem Stephenson was rated as one of his era's finest inside-forwards by almost everyone except the England selectors. Despite starring for Aston Villa and Huddersfield, he was only awarded a single cap. ‘A greater failure by England’s selectors I have never known,’ wrote journalist Ivan Sharpe.

Born in 1890 at Seaton Delaval in Northumberland, Stephenson was spotted by Aston Villa, making his debut in 1911. Over 10 years he scored 85 goals in 195 appearances, winning the FA Cup twice. Before the first win in 1913, he told Sunderland’s Charlie Buchan that Villa would win. When asked why he replied, “I dreamt it last night. And that Tom Barber’s going score.” Barber scored the only goal.

In 1920 Stephenson fell out with Villa after they asked him to live in Birmingham. Huddersfield’s manager Herbert Chapman quickly signed him. As his on-field general, Stephenson helped Chapman turn Huddersfield into the team of the twenties, winning three back to back League titles.

As a player, he was the ideal playmaker; skilful, an outstanding passer, unselfish and consistent. Retiring in 1929, he replaced Chapman as manager. He then set a club record as he managed them until 1942.