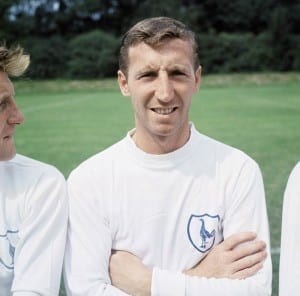 Tottenham Hotspur's Cliff Jones poses at a pre-season photocall in 1964. Pic via Mirrorpix.

A dangerous operator on either flank, Cliff Jones entertained and beguiled supporters at both Swansea Town and Tottenham Hotspur, becoming one the finest widemen of his generation.

Cliff was born into a working-class family in the south of Wales, and proudly considered himself a Swansea Jack. Jones’ talent was apparent from a very early age, and would soon be following in his father’s footsteps to represent his hometown club. Jones signed terms with the Swans in the summer of 1952 at the age of just seventeen, making his first league appearance for Billy McCandless’ side later that year.

The following season, Jones made the left-wing position his own. He became one of many top players developed by Swansea in the fifties, turning out alongside centre-half Mel Charles and Wales poster boy Ivor Allchurch. Though the team did not lift any silverware – Swansea reached consecutive Welsh Cup finals in 1956 and 1957, but lost on both occasions – Jones nevertheless caught the eye for his country as well as his club, netting a famous winner in Wales’ 2-1 victory over old rivals England in 1955.

Jones’ growing reputation, both domestically and internationally, saw a number of clubs chase his signature, but Jones opted to follow former teammate Terry Medwin to Tottenham Hotspur, who paid £35,000 for his services in February 1958. Later that summer, Jones was one of Wales’ leading lights in the 1958 World Cup, helping the Dragons reach the quarter-finals before falling to Pele’s Brazil.

Jones truly flourished at White Hart Lane when Bill Nicholson was promoted from first team coach to manager towards the back end of 1958. His electric pace and deft touch made him a nightmare for opposing defences to handle. Jones was a regular on the Spurs scoresheet at the end of the fifties, finding the back of the net 25 times en route to a third-place finish in 1959/60. 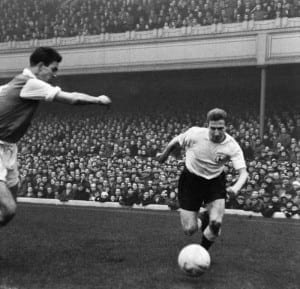 Jones making his debut for Tottenham Hotspur in the 4-4 draw against North London rivals Arsenal, 22nd February 1958. Pic via Mirrorpix.

More was to come from Jones and the ambitious Lilywhites. The tricky winger, who often confounded defenders by driving towards goal rather than the touchline, scored his fair share and laid on countless more for Bobby Smith and Les Allen as Spurs swept to the first Double of the century, lifting both the Division One championship and the FA Cup in the same year.

Jones played his part in the retention of the FA Cup in 1962, and was a constant menace from the wing during Tottenham’s 5-1 drubbing of Atletico Madrid in the Cup Winners’ Cup one year later. His darting runs and blistering speed drew admiring glances from the continent. At his peak in 1962, Serie A giants Juventus offered Spurs a world-record £125,000 to lure him to Italy, but Jones chose to remain at the Lane.

The diminutive Welshman remained a staple out wide for the next two years, and though Jimmy Robertson was the next rising star from the mid-sixties onwards, Jones nevertheless remained an important member of the squad.

Jones was 33 by the time of his departure, having spent a decade of his career in north London. He moved across the city to play for Fulham in October 1968, but years of hard tackles and cumulative injuries were beginning to take their toll. After two seasons at Craven Cottage, Jones brought down the curtain with a year of non-league football at King’s Lynn, retiring in 1971 at the age of 36.

In his heyday, Jones regularly had the Spurs faithful on their feet in awe and appreciation of his majestic talent. Ryan Giggs and Gareth Bale may be superstars of the modern game, but Cliff Jones was the Welsh wing wizard of the sixties.