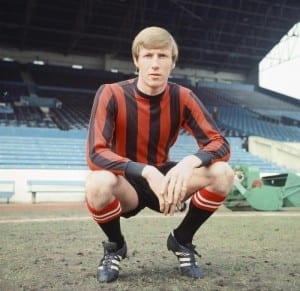 A number of Colin Bell's items, including League, FA Cup and League Cup winners' medals, are on display in the National Football Museum. There is, however, also an unusual item displayed here – a hand-made crown given to Bell by a fan towards the end of the 1975-6 season. Bell was coming back from injury and the fan wanted to welcome his return. Tellingly, Bell kept hold of the gift, he explained "I always kept what the fans gave me. I thought that if they had taken the time and effort to make something it's only right you kept it."

The many medals and trophies associated with Bell clearly do not tell the full story; he was adored by England and Manchester City fans and the respect was returned. He oozed quality, and gave his all for every team he played in –earning his the nickname 'Nijinsky', in homage to the famous Derby-winning horse. He graced the midfield during Manchester City’s greatest years as they won all domestic and European honours.

Bell is often regarded as one of England’s best attacking midfielders, and was voted Manchester City's all-time cult hero by BBC Football Focus. Although a shy and restrained individual, ‘The King of the Kippax’ set the football world alight. 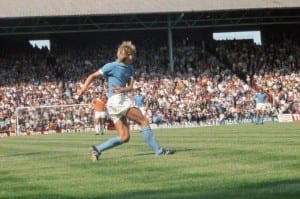 Bell wrote himself into Blue folklore as kingpin of the 1968 Division One championship-winning team.  Bell had joined the club from Bury in 1966. City were promoted that season and fought hard to establish themselves in the top flight. Bell was crucial in this formative period, ending up the leading scorer with twelve goals as the team finished fifteenth. The signing of powerful forward Francis Lee to complement the intelligence of Mike Summerbee and the energy of Colin Bell transformed the team.

Under manager Malcolm Allison, City won a second League Championship in 1968, winning the League on the last day of the season (a 4-3 victory against Newcastle United). It was a remarkable feat, and just two years after climbing out of the second division.

Bell’s contribution was recognised by England manager Alf Ramsey, who handed Bell his international debut in that year. In 1969 Manchester City won the FA Cup. The following year the League Cup and the European Cup Winners' Cup were added to Bell’s growing trophy cabinet. Bell played a part in the 1970 World Cup but England didn’t qualify for the tournament in 1974. 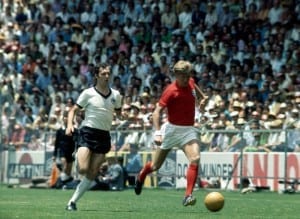 Manchester City manager Joe Mercer replaced Alf Ramsey and consistently played Bell. One notable international game was the 1975 match against Scotland. Bell pulled the strings from midfield and chipped in the 3rd England goal, after a neat build-up, in a 5-1 win. A serious knee injury in 1976 put a premature stop to his tremendous career. A challenge by Martin Buchan during the Manchester League Cup derby sidelined the midfielder for two years. He was just 29. Bell would never properly recover and despite valiant attempts at a comeback he was forced to retire in 1979.

In a 13-year spell, he made almost 500 appearances and scored 152 goals. What is perhaps striking about Bell, is that although he had much to brag about his innate modesty was evident throughout his career. His autobiography is revealingly called ‘Reluctant Hero’. He didn't need words to show who was the best, he let his feet do the talking. Colin Bell’s career saw a quiet North East lad reach the top of his game, only to have his career ended by injury far too early.