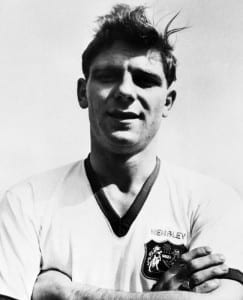 Regarded as one of the most promising talents ever produced on these shores, Manchester United boy wonder Duncan Edwards was well on his way to football stardom before his life was cut tragically short at the age of just 21.

Born and bred in Dudley, Duncan showed a natural aptitude for the sport from a young age, becoming England captain by the age of 14. By this point, he had already caught the eye of United scout Jack O’Brien, who fed back to Matt Busby in 1958 that he had “seen a 12-year-old schoolboy who merits special watching. His name is Duncan Edwards, of Dudley.”

"IF I WAS ASKED TO NAME A TEAM OF THE PLAYERS I PLAYED WITH, HIS NAME WOULD BE THE FIRST ONE I WOULD PUT IN, NO QUESTION ABOUT IT." SIR BOBBY CHARLTON

He was duly snapped up by Busby as an amateur. Having helped the youth side lift their FA Cup in 1953, Edwards was thrust into the first-team fray at the age of just 16 years and 185 days, becoming the youngest player to feature in a top-flight game. 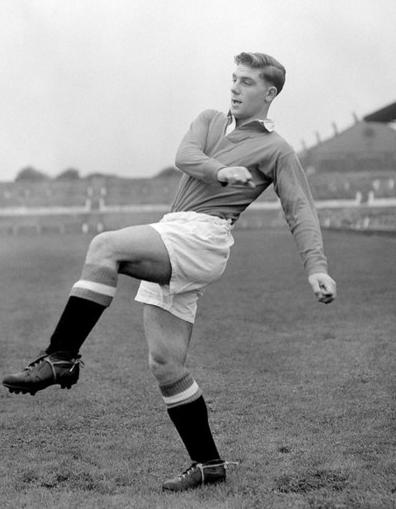 The teenager, along with teammates Bobby Charlton, Dennis Viollet, Eddie Colman and David Pegg, blossomed at Old Trafford, becoming a key member of the “Busby Babes”.

Edwards was considered to be the complete player in many regards; tall, physical, but with skill and grace that often defied his frame. Equally comfortable with both feet, the prodigy was at home with the ball at his feet, but just as effective in the sliding tackle. His mental attitude also belied his youth, possessing the kind of presence and authority on the field usually found in more seasoned veterans.

Busby best summed up Edwards’ all-round ability: “We used to look at players in training to see if we might have to get them to concentrate more on something. We looked at Duncan, and gave up trying to spot flaws in his game.”

His eye-catching performances in Manchester led to a senior England call-up for the 18-year-old in 1955. “Big Dunc” would go on to earn another 17 caps for his country, netting five times. Despite serving with the armed forces as part of his National Service, Duncan was allowed to turn out for United, playing an integral role in their consecutive championship successes of 1956 and 1957.

By 1958, Duncan Edwards was one of the first names on the teamsheet for both club and country. However, the left-half was the last of eight players to ultimately lose their lives in the Munich air disaster in February that year. When visited by United assistant Jimmy Murphy, he asked "What time is the kick off against Wolves, Jimmy? I mustn't miss that match," a testament to the young man’s strength and commitment.

It took Manchester United years to recover from the loss of those eight players, not least their young talisman. “Big Dunc” was, in the words of his manager, “a truly amazing boy”, one who seemed destined for greatness at the very highest level.