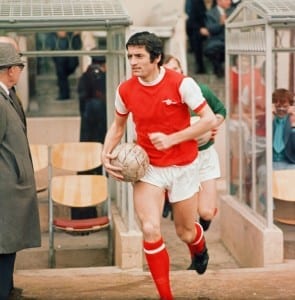 Frank McLintock had already made over 200 league and cup appearances for Leicester City when, aged 24, the Scotland international moved to Arsenal in 1964.

Having moved partly due to feeling that Leicester did not match his own high ambitions for success, the centre half endured a tough start to life at Highbury, with three mid-table seasons leaving him questioning his future at the club.

Taken under the wing of new manager Bertie Mee, McLintock's legacy was to be assured with Gunners' fans as he became the on-field leader of the side that eventually claimed the double in 1971.

He was Arsenal's player of the season in Mee's first season in charge, and was made captain for the following campaign. Having been an all-action presence in the middle of the park during his career so far, injuries led Mee to call on McLintock to fill in as a central defender in 1969; it was to prove the making of the man, and the team. Commanding, committed and demanding of respect, McLintock became a more focused presence, capable of leading the team from the back.

He lifted Arsenal's first silverware since 1953 when leading the side to victory in the 1970 Fairs Cup, but the following season saw him etched into Arsenal folklore. The Gunners' matched Tottenham's achievement of a decade earlier, by claiming a league and FA Cup double in 1971. The league was secured with victory at White Hart Lane. A week later, at Wembley, Arsenal went 1-0 down to Bill Shankly's Liverpool in FA Cup Final extra-time.  It was McLintock's fourth final at Wembley; he'd been on League Cup final losing sides twice with Leicester and once with Arsenal, and he was determined not to lose another. Eddie Kelly and Charlie George scored the goals that won the Cup; but McLintock took the credit for forcing the team to glory.

Leaving Arsenal in 1973, he made a further 150+ appearances for Queens Park Rangers, before retiring in 1977.