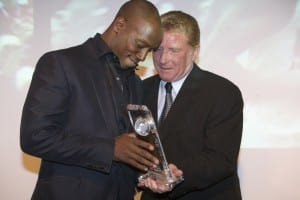 Ian Wright receives his Hall Of Fame award from Alan Ball in 2005.

A latecomer to professional football, Wright signed his first contract with Crystal Palace when he was 21, having all but given up on a career as a professional. Spotted by a Palace scout while playing non-league for Dulwich Hamlet, he was working as a plasterer and had trained as a bricklayer, having been rejecte after a number of trials as a teenager.

Nowadays, Wright is instantly associated with Arsenal, his career with Palace somewhat overshadowed. Yet Wright was The Eagles’ post-war record goalscorer with 117 goals. In 2005 he was named as their ‘Player of The Century’.

With attention-grabbing goals in the league and in the 3-3 FA Cup Final draw against Manchester United in 1990, it was little surprise when Wright gained the attention of bigger clubs. Arsenal paid a club record £2.5 million for the striker in 1991. At the time Arsenal were reigning champions and there were question marks over the necessity of the signing: Alan Smith, Kevin Campbell, Paul Merson and Anders Limpar were already among the clubs’ ranks. 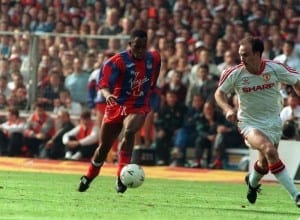 Instantly Wright proved the doubters wrong, winning the Golden Boot in his first season. ‘Ian Wright Wright Wright’ had begun the path to his legendary status. He went on to be the club's top scorer for the next six seasons in a row. Overall Wright won 2 FA Cups, 1 League Cup, 1 European Cup-Winners’ Cup and a Premier League title.

His career was not all plain-sailing however.  Arsenal began to falter in the mid-90s, a period marked by the dismissal of George Graham. The arrival of Dennis Bergkamp heralded a brief but prolific partnership. The 1997/8 campaign saw Wright challenging Cliff Bastin’s Arsenal goalscoring record. Needing two goals to beat the record he celebrated prematurely after netting one and revealing a vest that read ‘ 179 just done it!’. Typically, he ended up securing the record in style, going on to score a hat-trick in the match. 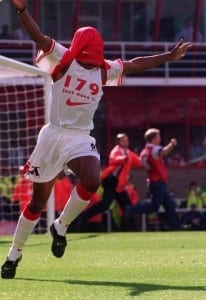 In total he registered 185 goals for Arsenal; a record that has since been passed only by fellow Hall of Fame and Arsenal legend, Thierry Henry. On 15 July 2008, he finished 4th in ‘50 Greatest Gunners’ listed on the Arsenal website.

Wright went on to play for West Ham, Nottingham Forest, Celtic and finally Burnley (helping them to win promotion) before his retirement in 2000. Since retirement Wright has made a career in punditry and television work.