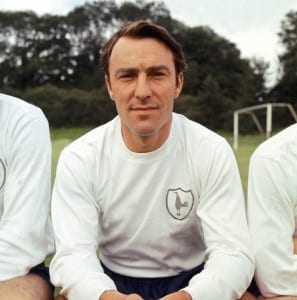 Born in East Ham in 1940, Jimmy Greaves’ talent was clear from an early age. He signed for Chelsea in 1956 and in the next year set a record by scoring 114 goals for the youth team. He made his senior debut at the start of the 1957/8 season at the age of 17, scoring in a 1-1 draw with Tottenham. He would go on to score during every major debut in his career. By the age of 20 he had scored 100 league goals and remains the youngster ever player to do so.

In 1961 he signed for AC Milan in order to escape the restrictions of the maximum wage. However, he did not settle in Italy and eagerly returned to England in 1962. Tottenham Hotspur bought him for £99,999, as manager Bill Nicholson did not want him to become burdened by being the first £100,000 footballer.

He continued to set goal scoring records at Tottenham and for three successive seasons was the leading First Division striker. He scored after just 3 minutes as Tottenham won the FA Cup in 1962 and two against Atletico Madrid in the final of the 1963 Cup Winners’ Cup.

Greaves first played for England in 1959 and racked up 44 goals in 57 games. The six hat tricks he scored still stand as an England record. However, he famously missed out on the 1966 World Cup Final as Alf Ramsey opted to stick with Geoff Hurst, after he replaced the injured Greaves in the quarter final.

Greaves finished his career playing for West Ham between 1969 and 1971. One of England's greatest ever strikers finished playing top-flight football at the age of 31, as personal problems led to issues with fitness and motivation. He later returned to play for Chelmsford and Barnet in the Southern League, but he will be remembered for the impact his undoubtable talent made on the world stage.