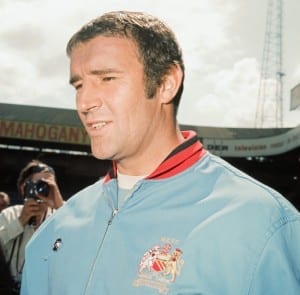 Malcolm Allison, pictured in the build-up to the 1969 FA Cup final. Image via Mirrorpix.

Flamboyant ‘Big Mal’ always had an eye for publicity. Famed for his ‘lucky fedora’ and fat cigar, he was one of the game’s biggest characters in the 1960s and 70s.

Allison was also an intelligent coach, well ahead of his time in emphasising players’ fitness and continental tactics. He was certainly a divisive figure: Mike Summerbee described Allison as "the greatest coach this country ever had. And still is, without a shadow of a doubt" whereas Don Revie dismissed him as "an embarrassment to the game".

Love him or hate him, he was one of the deepest thinking and most innovative football coaches England has known.

"I LOOKED UP TO THE MAN...IT'S NOT TOO STRONG TO SAY I LOVED HIM." - BOBBY MOORE, ALLISON'S TEAM MATE AT WEST HAM

Allison managed 11 clubs at home and abroad. He took charge of Crystal Palace on two separate occasions, and also had spells as manager of Bath, Plymouth (which included a League Cup semi-final appearance), Galatasaray, Toronto City, Middlesbrough and Bristol Rovers, but it is perhaps Manchester City that he is most associated with. 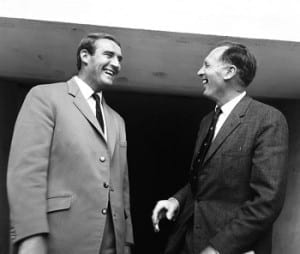 Allison forged a successful partnership with manager Joe Mercer throughout the late sixties and early seventies. Image via Mirrorpix.

Yet despite the success, signs of strain began to appear in the relationship as the 1970s got under way. Allison was promoted to manager when Mercer moved uneasily into an "upstairs" role in October 1971. The glory days seemed behind however and his success as manager was limited. Allison resigned as City manager in March 1973, prior to a turbulent three-year reign at Palace, before returning to Manchester in 1979. Again, success was limited; he returned to Palace and then moved on to Sporting Lisbon winning the League and Cup double in 1982 before being dismissed for alleged indiscipline.

Had he been content to stick to what he did best – coaching rather than management – there was no limit to what he might have achieved. He was innovative and inspiring, a coach who strived for perfection. His bizarre ideas included having his players wear gas masks to build their lung capacity. Players trained with ballet dancers and rugby players and the coaching often paid off. Very few coaches made such an impression on players, or inspired such loyalty.

Later in life, his ability to spot talent didn’t fail him: as a Manchester City scout he suggested signing a young Luis Figo.

When coaching in Portugal in the 1980s, Allison worked with a goalkeeping coach whose student son began attending training, and went on to refer to Allison as "my inspiration". The student was Jose Mourinho, who went on to emulate Allison with similar glamour and confidence. Malcolm Allison was, however, one of a kind.