'Boy wonder' Michael Owen looked destined for stardom from an early age. He scored an unprecedented 12 goals in eight games for the England Schoolboys (Under 15) team in 1995. 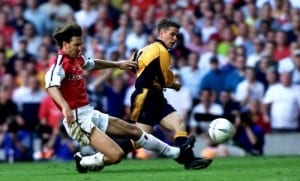 He took to senior football just as easily: Owen scored on his debut for Liverpool in 1997, aged 17, and was their leading scorer every season between 1997 and 2004. With fantastic pace, and deadly eye for goal and an ability to anticipate opportunities in the box, Owen scored a total of 158 goals in 297 appearances for Liverpool. As the team struggled for consistency Owen's goals remained a threat, and although the Premier League title was to remain out of their grasp, Owen and Liverpool won the FA Cup, League Cup (twice), UEFA Cup and Super Cup during his time, most notably claiming four of those titles in 2001. Owen was the hero of the 2001 FA Cup Final win; scoring twice in the final 10 minutes as Liverpool came from behind against Arsenal.

Owen moved to Real Madrid in August 2004. In the 'galactico' era of world stars at the Bernabeu, Owen was limited to just 15 starts and, despite scoring 18 goals in his single season in Spain, returned to the Premier League with Newcastle United the following year. Owen's eye for goal remained, but with injuries beginning to take their toll, the lightning pace that had left defenders in his wake over previous seasons began to wane. Despite losing almost the whole 2006/07 season to injury, Owen scored 30 goals in all competitions during 4 years at the club.

A surprise move to Manchester United provided something of a fairytale ending to Owen's career when, given the famous no 7 shirt, Owen provided famous cameos including the 95th-minute winner in a Manchester derby at Old Trafford, and a Champions' League hat-trick against Wolfsburg. Again facing a number of injury worries, and frequently a substitute, Owen nevertheless won the only Premier League title of his career with United in 2011. Released by the club in 2012, Owen made a handful of appearances for Stoke City the following season, before announcing his retirement in 2013. 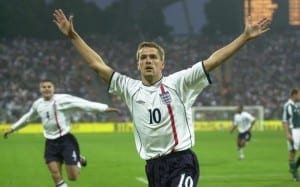 Arguably Owen's greatest contribution to English football was made in the colours of the national team. Owen made his debut for England aged 18 in 1997 and his goal against Argentina in the 1998 World Cup in France was voted one of the greatest ever England goals. He went on to score a total of 40 goals in 89 international appearances, including a memorable hat-trick against Germany in 2001.

In the same year he was became one of only four Englishmen to be crowned European Player of the Year. Owen played in three World Cup final tournaments and two European Championship final tournaments. As Owen said of himself “One thing I will guarantee you is goals”.