Nottingham Forest's 'miracle men', the side who won back-to-back European Cups in 1979 and 1980, are set to become the latest team to inducted to the National Football Museum Hall Of Fame at a ceremony in Nottingham tonight, Thursday 3 November 2016. They are only the 8th team to be added, joining a company including the England 1966 side, Manchester United's Busby Babes, and Bob Paisley's great Liverpool side. We asked The Guardian's Chief Football Writer, and author of I Believe In Miracles: The Remarkable Story of Brian Clough's European Cup Winning Team, Daniel Taylor to describe what makes this sometimes-overlooked team one of the most incredible in football history: 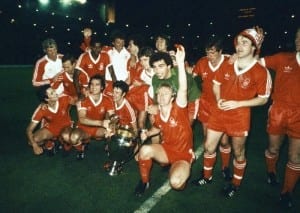 1980 European Cup Final at the Santiagio Bernabeu Stadium in Madrid. Nottingham Forest 1 v SV Hamburg 0. The Forest team celebrate with the trophy after the match. 28th May 1980. Pic via Mirrorpix.

Perhaps the best way to sum up the almost implausible journey that finished with unfashionable, unheralded Nottingham Forest winning the European Cup, twice, is to think back to what the club were like before a certain Yorkshireman with a wagging finger, a nasal accent and a habit of kissing television interviewers sprinkled his precious magic on the club.

Forest were 13th in the old Division Two when Brian Clough landed his coat on the peg for the first time on a freezing January morning in 1975. One of their own committee members had described them as “the least progressive club in the country” and one of the previous managers, Dave Mackay, had warned off Clough. “You'll never achieve anything there,” were his precise words.

What happened over the following five years is nothing short of a miracle and, to put the story into perspective, just try to imagine Preston North End, currently 13th in the Championship, winning promotion next May, then the Premier League at the first attempt, back-to-back Champions Leagues, a couple of EFL Cups and creating a record for going unbeaten in the top division – 42 matches in Forest’s case – that would last a quarter of a century. 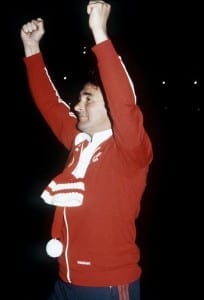 Forest were that team: they did all the above as well as knocking Liverpool, the double European Cup winners, off their perch, long before Sir Alex Ferguson coined the phrase. They did it with five players – Viv Anderson, Martin O’Neill, Ian Bowyer, Tony Woodcock and John Robertson – who were there from the start and the journey took them from five points off the relegation places into Division Three, with sub-8,000 gates, to Camp Nou, taking on Barcelona for the Super Cup. Another trophy was added to the collection and when Clough's victorious players left the stadium that night there was a mob waiting outside. “Two rows of Barcelona fans, eight deep, all the way from the exit to our coach,” John McGovern, the captain, recalls. “They were all very quiet and I thought: ‘We could be in trouble here.’ It was then they started clapping. As we walked to our coach they clapped us all the way. Not a Forest fan in sight, all Barcelona fans. Clapping us out of their own stadium.”

The story will never happen again but, equally, it had never happened before either. People forget that Forest went up with 52 points, the fifth-lowest of any promoted team in history, and that they lost to York, Peterborough and Bristol Rovers, twice, before Peter Taylor joined Clough’s side and everything suddenly clicked with a team one newspaper described as “a mix of fresh and well-worn faces who ought to be slogging it out at the bottom of the table”. 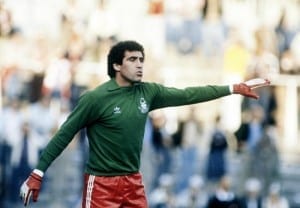 Kenny Burns had a reputation at Birmingham City as an untamed, hard-drinking pub-brawler until Forest’s management duo converted him from a marauding centre-forward into what Taylor described as the Scottish Bobby Moore, winning the football writers' 1978 player-of-the-year award. Larry Lloyd’s signing-on fee was a washing machine Clough had pinched from the laundry department. Frank Clark was a free transfer from Newcastle, on the verge of signing for Fourth Division Doncaster Rovers. John Robertson was drifting so badly Clough’s predecessor, Allan Brown, had tried to offload him to Partick Thistle in a swap deal for a player called Ronnie Glavin. Peter Shilton arrived as the most expensive goalkeeper in the league and Trevor Francis later became the first £1m man, but it was an unlikely assortment of free transfers, bargain buys, rogues and misfits, all turning out to be exceptionally gifted footballers. 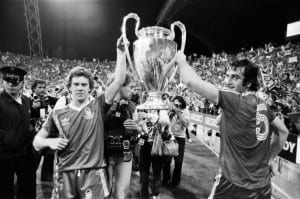 European Cup Final at the Olympic Stadium in Munich.
Nottingham Forest 1 v Malmo 0.
Forest players Tony Woodcock (left) and Larry Lloyd celebrate with the trophy after the match.
30th May 1979. Pic via Mirrorpix.

Garry Birtles was a £2,000 signing from Long Eaton United working as a carpet-fitter and doubling up in Nottingham’s Sunday alehouse leagues with Long Eaton Rovers until Clough and Taylor turned him into the European young player of the year. Birtles’s amateur career ended against a team called Clumber Kitchens and Bathrooms amid the stale beer fumes of Victoria Embankment, Nottingham’s equivalent of Hackney Marshes. His first goal for his hometown club helped knock Liverpool out of the European Cup and when Forest brought the trophy back to the Old Market Square he was presented with a special award from Roy of the Rovers magazine. “Every time I watch Liverpool now I look for the flags on the Kop because there’s a two-year gap in the dates," Birtles says. "They go from ’77 and ’78 to ’81. And I always think: ‘That’s us, that gap. We did that.’”

This was the team that prepared for their European Cup semi-final against the great Ajax side in 1980 by walking round the red-light district of Amsterdam, settling down for some late-night beers in a bar full of potheads and sex tourists. Shilton’s training for the final took place on the roundabout of a dual-carriageway, surrounded by cars tooting their horns, because it was the only piece of grass he could find in their Spanish resort. 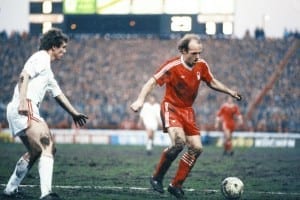 The club were so skint when Clough arrived they held a cheese and wine event to raise a few quid in his first summer. The training ground was a squelchy piece of public grass beside the River Trent and at least one player used a Shipstone’s Brown Ales beermat as a tax disc. Yet Forest, at their peak, passed the ball as though they were playing on a bowling green and it is only right that a place has been reserved for them in the Football Museum's Hall of Fame.

A lot of those players have always wondered why they never seemed to receive the credit of other successful English teams. It was Bob Wilson, in his early days as a BBC pundit, who announced their “bubble would burst”. It turned out the bubble was made of something more substantial than soap and water, but even when Forest won their first European Cup the team award in the 1979 BBC Sports Personality of the Year show went to the British show-jumpers (“four ****ing horses,” as Forest’s secretary, Ken Smales, put it). 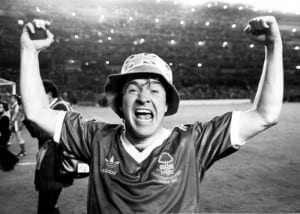 Nottingham Forest goalscorer John Robertson celebrates after his side's victory over SV Hamburg in the European Cup Final at the Bernabeu Stadium in Madrid. 28th May 1980. Pic courtesy of Mirrorpix.

Robertson, who was inducted into the Hall of Fame in a brilliant ceremony a couple of weeks ago, used to take offence sometimes about the way the term were portrayed as a “rag-tag and bobtail outfit” and his team-mates will argue that the former Scotland international was among the greats of the game.

Robertson left his fingerprints all over two European Cup finals – scoring the winner against Hamburg in 1980 and setting up Francis to head in the only goal against Malmo the previous year. Clough called him “the Picasso of our game” and Forest’s trainer, Jimmy Gordon, once paid him an even higher compliment. “I saw a lot of Tom Finney and Stan Matthews in my time and it was very difficult to choose between the two. But when you look at what Finney and Matthews had to offer, John had a bit of both – and something extra on top.”

John McGovern puts it another way. “When I try to tell people how good he was it can be difficult because it was over 30 years ago. So what I generally say is: ‘You know a few years ago there was a guy called Ryan Giggs who played until he was 40 and was regarded as one of the best left-wingers of all time? Well, John Robertson was like Ryan Giggs but with two good feet, not one.’” 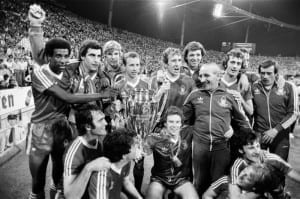 The legacy, all these years on, is that Nottingham has won the competition more times than London, Paris, Berlin, Moscow and Rome altogether. It took Manchester United 31 years to win the European Cup for a second time and it was not until 2012 that Chelsea finally notched up one for London. And the world sees Sherwood Forest county differently because of it. “All of a sudden, Nottingham didn’t just have Robin Hood,” McGovern says. “We had Robin Hood, Brian Clough and Nottingham Forest.”

Our thanks to Daniel Taylor, @DTGuardian, for the words. All pictures are courtesy of Mirrorpix, with thanks.