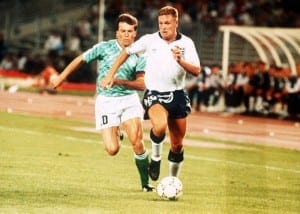 Paul Gascoigne battles with Lothar Matthaus in the game between England and Germany. Pic via Mirrorpix.

One of England's brightest talents in the 80s and 90s, Paul Gascoigne remains one of British football's most well-known personalities.

Born in Gateshead in 1967, Gascoigne made his debut for Newcastle United in 1985. By 1988 he was voted PFA Young Player of the Year and was in the PFA Team of the Year, having shown great natural ability in midfield.

A British record fee (£2 million) followed as Tottenham Hotspur snapped up the country's hottest footballing prospect. In the same year the talented midfielder made his debut for Bobby Robson's England.

Football fans were becoming aware of not just Gascogine's precocious talent, but also a fun-loving personality that showed itself in his on-and-off-pitch behaviour.

In the summer of 1990 Gascoigne was discovered by global football fans, and the wider public at home found a new celebrity icon.

Gascoigne had enjoyed a fine World Cup in Italy, as England had their most successful tournament since 1966. In a tightly-fought semi final against West Germany, he picked up a yellow card, meaning he would be suspended for the final, if England got there.

West Germany famously won on penalties, but perhaps the most enduring image of England's tournament was the close-up, captured by TV cameras and shown around the world, of the 23 year old using his shirt to wipe away tears following that booking, as senior players hurried to put a protective arm around him.

Gascoigne was named in the tournament All-Star team for his performances and returned home to a frenzy that the national press referred to as ‘Gazzamania’: he won BBC Sports Personality of the Year the same year. 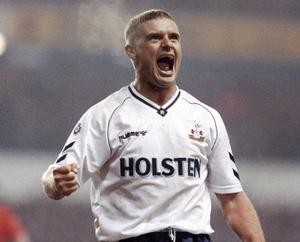 Back on the pitch, Gascoigne reached the FA Cup Final with Spurs in 1991, but ruptured cruciate ligaments in his knee when making a high tackle. Before the game, Gascoigne had agreed terms to join Italian club Lazio: the injury however meant that he missed the entire following season.

He ruled himself out even longer when he damaged his knee again on a night out, further delaying the move to Italy. Eventually he joined in 1992 but was plagued by injury that sidelined him for most of the 1994–95 season. Despite the spell overseas, the British press and fans continued to be interested in a player whose talent and joy for the game seemed to be matched only by his consistent bad luck.

Leaving Lazio for Rangers in 1995, Gascoigne won the league twice, Scottish Cup and the League Cup, recapturing some of the form and fitness that had made him crucial to the national side.

"The best player I've ever played with was Paul Gascoigne. He had everything. He was amazing" Paul Ince

He was key to Terry Venables' England team at Euro 1996, scoring a memorable ‘flick and volley’ goal against Scotland. His famous celebration, with team-mates spraying water in his mouth, was a nod to the tabloid reports of off-pitch drunkeness that were becoming a regular occurrence.

Gascoigne helped England qualify for the 1998 FIFA World Cup, but was left out of the final squad by manager Glenn Hoddle after injury and disciplinary problems, seemingly fuelled by an off-pitch lifestyle that was becoming a concern to club and national managers. He won a total of 57 England caps and scored 10 goals.

He joined Middlesbrough in 1998, helping them into the Premier League as Division 1 runners-up and played his final top-flight season at Everton in 2000.

Widely recognised as the most naturally talented English footballer of his generation, Gascoigne has openly talked about how his alcoholism has affected his professional and personal life.