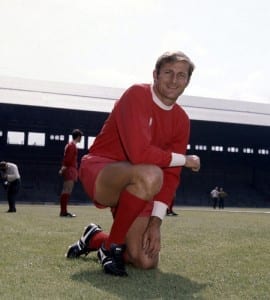 Roger Hunt Liverpool and England footballer. Circa 1968. Pic via Mirrorpix

Roger Hunt was the only England forward to start every game of the 1966 World Cup. It was the prolific Liverpool striker’s three goals in the three group games that secured England’s progress, but the man who was an out-and-out goalscorer for the Anfield club offered England even more.

Alf Ramsey’s insistence on a high workrate from his forwards had made Hunt an indispensable member of the team; highly valued by his colleagues as, in the words of Martin Peters, “we all knew Roger would run his socks off for the team”.

Making his debut for Liverpool in the Second Division in 1959, Hunt immediately found his goalscoring touch. When Bill Shankly took over at Anfield, Hunt was in the minority of players who were retained. The new manager’s faith was repaid, as Hunt was to be the club’s top scorer for eight consecutive seasons.

During this time Hunt’s goals led to promotion to Division One, two Division One titles (1964 and 1966) and an FA Cup win in 1965, with Hunt scoring in the final against Leeds. 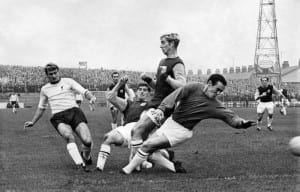 Having been given an England debut in 1962 by Walter Winterbottom, it was Hunt’s willingness to work for the team under Alf Ramsey that converted him from goal-grabbing squad member (he was part of the 1962 World Cup squad, but didn’t play) to guaranteed starter in time for the World Cup in 1966.

For Liverpool, Shankly used Hunt as an out-and-out striker. His outstanding work-rate and the variety of goals he was capable of scoring earned him the nickname ‘Sir’ Roger from the Kop. In his 11th season at Anfield, after 492 games and a record 245 league goals, Hunt was sold to Second Division Bolton. 56,000 showed up for Hunt’s Anfield testimonial in 1972, when a team of England’s world cup winners played Liverpool’s 1965 Cup winners. Both teams owed much of their success to Hunt. 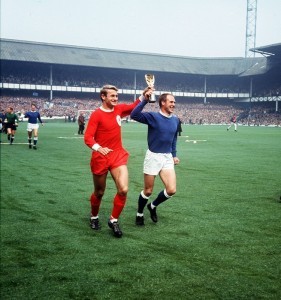 Hunt was awarded an MBE in 2000, and was inducted to the National Football Museum Hall Of Fame in 2006. Among his many career achievements Roger had the distinction of scoring the first goal to appear on the BBC’s Match Of The Day programme, in the first game of the 1964-65 season, against Arsenal.

50 years on from that broadcast, Roger kindly loaned his 1964 League winners’ medal and 1965 FA Cup medal to the National Football Museum for display.  A modest, unassuming man, he visited the museum by train, and spoke to staff about his memories of the game and era over a cup of tea in the cafe. The handful of visitors who recognised one of England’s great strikers that day were all greeted cheerfully.

Roger Hunt’s 1966 World Cup medal is also now on display in the museum’s 1966 World Cup Exhibition. We were delighted to welcome Roger and his family to the launch, alongside Sir Bobby Charlton and Jimmy Armfield. Roger is also featured in the Football Walk Of Fame outside the museum. 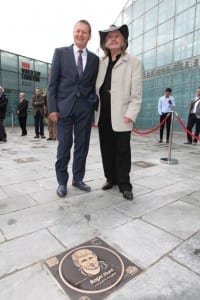