Sir Alf Ramsey is the first person to be inducted to the National Football Museum Hall Of Fame twice; as a manager (2002) and as a player (2010). 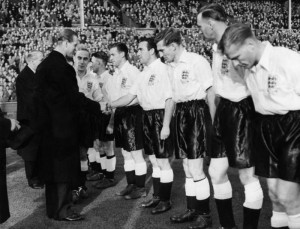 In a playing career that began during the World War Two years, Ramsey was a reliable Right Back for Southampton and Spurs, making over 250 appearances for the North London club. He was captain of England on three occasions, scoring three goals (each from the penalty spot) and won 32 caps in total. Perhaps tellingly, Ramsey’s final appearance was in the 6-3 defeat to Hungary; a game where English football finally woke up to the tactical superiority displayed by the great European sides.

Appointed manager of Third Division South Ipswich Town in 1955, by the time he left for the England job in 1963 he had made the Suffolk side Division One champions. Ramsey’s reputation had been built around tactical nous and an ability to get the best performance from even moderately talented players.

Even so, his assertion that England would win the next World Cup shortly after his appointment was a bold statement. Ramsey himself had played in the 1950 World Cup defeat to the USA and was well aware of his country’s shortcomings in international competition.

Ramsey was seen by many as England’s first ‘proper’ manager; taking over issues including squad selection that had previously been overseen by a board of selectors. By the time of the World Cup in 1966, Ramsey had a squad who, with young captain Bobby Moore in the heart of defence, were fluent in switching styles to confound the opposition. The team became known as the ‘wingless wonders’ thanks to a narrow 4-4-2 with a packed, direct midfield (as they played famously in the final, with Alan Ball running tirelessly in the centre), but in many of the previous games Ramsey had employed a 4-3-3 with more width, with John Connelly, Terry Paine and Ian Callaghan all appearing in wide positions during the tournament.

Ramsey’s modern tactical approach was complimented by a strictness that demanded a high standard of performance and reliability both on and off the pitch. There was little room for star treatment in Ramsey’s England squads, and the stress he placed on physical fitness was as important as tactical understanding. 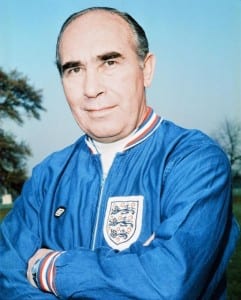 After the high of 1966, Ramsey led England to 3rd place in the 1968 European Championships. In the 1970 World Cup, West Germany avenged the ’66 final with a 3-2 victory in the knockout stages, with Ramsey being blamed for cautious substitutions in the searing Mexican heat, as England led 2-0 with 20 minutes left: criticism that has subsequently been rebuked by many of the players concerned.

With the squad that been World Champions beginning to age, Ramsey’s new England lost again to eventual European Champions West Germany in 1972, before failure to qualify for the 1974 World Cup led to Ramsey’s dismissal.

However his legacy remains as the most successful England manager in both World and European competition. The reliable Right Back who read the game beautifully revolutionised his country’s reputation on the world stage. Knighted in 1967, Sir Alf Ramsey passed away in 1999. He was an inaugural inductee to the National Football Museum Hall Of Fame in 2002.