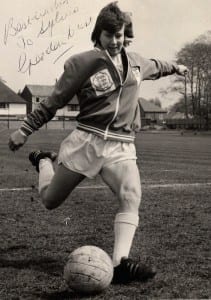 Sylvia Gore created history when she scored the first goal for an official England international women’s team in 1972. That appearance in a 3-2 win over Scotland only took place after she had spent over £2,000 to progress through national trials. The majority of men's games in Scotland had been called off that day, as Gore's goal on a frozen pitch started an England fightback from 2-0 down.

As a youngster, Sylvia was encouraged by her family to play football, but was prevented from joining the boys’ team at school and had to look elsewhere to participate. Starting with Manchester Corinthians at the age of 12, Sylvia later played for Fodens, helping them to a shock win over Southampton in the 1974 Women’s FA Cup final. Known as the ‘Denis Law’ of women’s football, she once scored 134 goals in a season.

After retiring from playing at the age of 36, Sylvia managed the Wales International women’s team and acted as secretary to Liverpool FC Ladies. Sylvia has also been a member of the FA Women’s Committee and spent many years volunteering for the Liverpool FA. In 2013 she was awarded an MBE for Services to Girls and women’s association football. 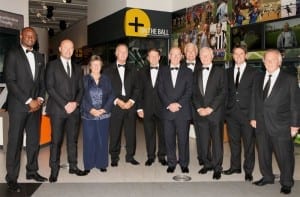 Presented with her Hall Of Fame award at the National Football Museum in October 2014, Gore rubbed shoulders with Premier League players like Alan Shearer, Michael Owen and Patrick Vieira. Receiving her award from Sir Trevor Brooking, Sylvia shared her story with event host Dan Walker;  including the story of playing on a frozen pitch and scoring in the snow in that first international game.

Her level of dedication to the game as a player, coach and ambassador made Sylvia the star of the evening, with many of the other inductees referring to Gore's achievements during the event. 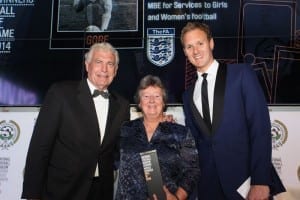 At the time of her induction, Sylvia said "I am delighted to be entered into the Hall of Fame. I am so excited and thank the panel for choosing me and in particular Sir Bobby Charlton."

The National Football Museum were saddened to hear of Sylvia Gore's death in September 2016.

FA participation and development director Kelly Simmons summed up Sylvia's importance to many footballers shortly after her passing: “Sylvia was an absolute pioneer for women’s football in this country and without her the game wouldn’t be in the position it is today.

“She made such significant contributions to the game on and off the pitch over many decades, making many friends in the sport along the way."

The FA saddened by death of Sylvia Gore