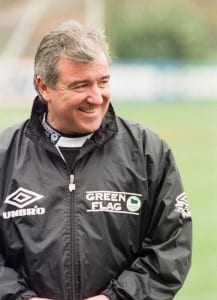 Inducted to the National Football Museum Hall Of Fame in 2007, Terry Venables is the popular, outspoken England manager whose side went out of Euro 96 on penalties in the semi final. It was the Londoner’s only major tournament in charge; he had managed England for 23 games, losing only once.

Venables had enjoyed a good career as a midfielder for a number of London’s top clubs, with over 500 appearances for Chelsea, Tottenham and QPR, before beginning his interest in coaching while still playing for Malcolm Allison’s Crystal Palace.

A keen motivator, and willing to put his faith in the club’s own youth players, Venables’ Palace side were promoted twice in three seasons, finishing the 1979-80 season in 13th; the highest the club had been since before World War One.

The following season, Venables moved to another of his former clubs, taking over at Loftus Road with QPR in the Second Division. He took Rangers to his first FA Cup Final as manager, losing a replay to Spurs, but lead the team to the First Division in 1983. 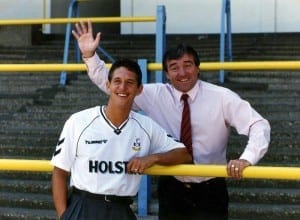 Tottenham Hotspur footballer Gary Lineker with his manager Terry Venables on the terraces at White Hart Lane after signing from Barcelona, June 1989. Pic courtesy of Mirrorpix.

Venables’ reputation was about to rocket however, when taking over the ‘sleeping giants’ of Barcelona in 1984. Quickly earning the nickname ‘El Tel’ in the English press, Venables’ first job at the Catalan club was to sell Diego Maradona, widely seen as the world’s best player, to Napoli for £6.9 million; a world-record fee.

Reportedly, it was Maradona who needed the money from the transfer, but Venables raised a few eyebrows when replacing the Argentine genius with Spurs’ Scottish striker Steve Archibald. However, Venables introduced a hard-pressing 4-4-2 which got the best out of a talented but previously success-starved squad. His first league game was a 3-0 win away at great rivals Real Madrid. By the end of 1984-85 season, Barcelona were La Liga champions; ending a run of 11 years without a title. A first European Cup final appearance for 25 years followed in 1986, with Barca eventually losing on penalties to Steaua Bucharest.

His return to England in 1987 saw Venables take over at yet another former club, this time Spurs. Venables brought in future Hall Of Fame inductees Gary Lineker (who he had previously recruited at Barcelona) and Paul Gascoigne, who became English football’s greatest talent under Venables’ leadership. Nevertheless, Spurs struggled for league consistency but did taste FA Cup glory, lifting the famous trophy in 1991.

Off the pitch, Venables’ business dealings had led to number of court hearings that threatened to derail his football career. However his appointment as England coach in 1994, following the national team’s failure to qualify for the USA World Cup, sparked a much-needed overhaul of the Three Lions’ fortunes. 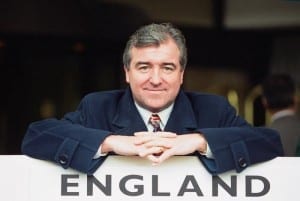 Venables’ skills as a motivator and good man-manager were in evidence as a side of mixed abilities began to get the English public believing a major tournament victory was possible on home soil, 30 years on from 1966. A 3-1 friendly loss to Brazil was the only blot on Venables’ record as the tournament began, with Alan Shearer and Teddy Sheringham proving a formidable forward partnership, and Paul Gascoigne shrugging off concerns about his lifestyle to highlight his undoubted ability. Gascoigne’s superb goal, which immediately followed a David Seaman penalty save, saw off Scotland in the group stage; a 4-1 hammering of highly-fancied Holland was Venables’ side at its very best.

Penalty joy against Spain was to be followed by heartache against Germany. Venables’ own career stalled after that, with relatively unsuccessful spells back at Crystal Palace and later Leeds United. But he is still remembered as the Englishman who returned winning ways to the Nou Camp, and got England fans to believe, if only for a summer.