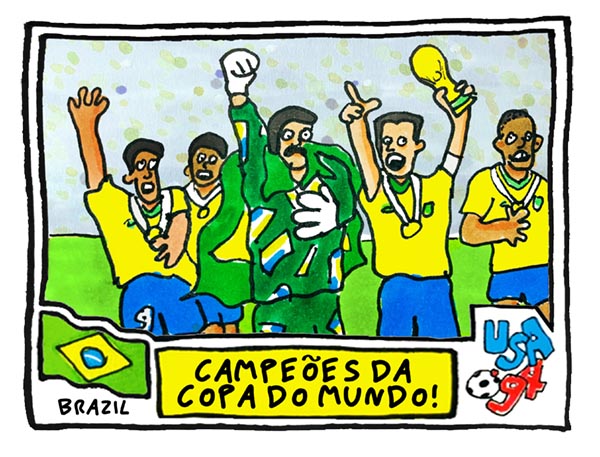 It was a long wait, but Brazil finally returned to the top of the world after 24 years.

In that time, they had failed to make the final on five consecutive occasions, fallen foul of bad luck (and perhaps other things), and also lost the original Jules Rimet Trophy from their headquarters in Rio. Not exactly the golden era the Brazilian fans had anticipated.

By 1994, the ultra-attacking, flair-driven Brazil had been tempered somewhat by good old-fashioned pragmatism. It wasn’t always pretty, but it was effective. In the knockout stages, the men in yellow won every one of their games by a one-goal margin, then played out a goalless final against Italy, ultimately becoming the first nation to win a World Cup final on penalties.

It didn’t exactly evoke memories of Pelé, Carlos Alberto and Garrincha, but when you’ve gone over two decades without a World Cup win, you take success over samba soccer. 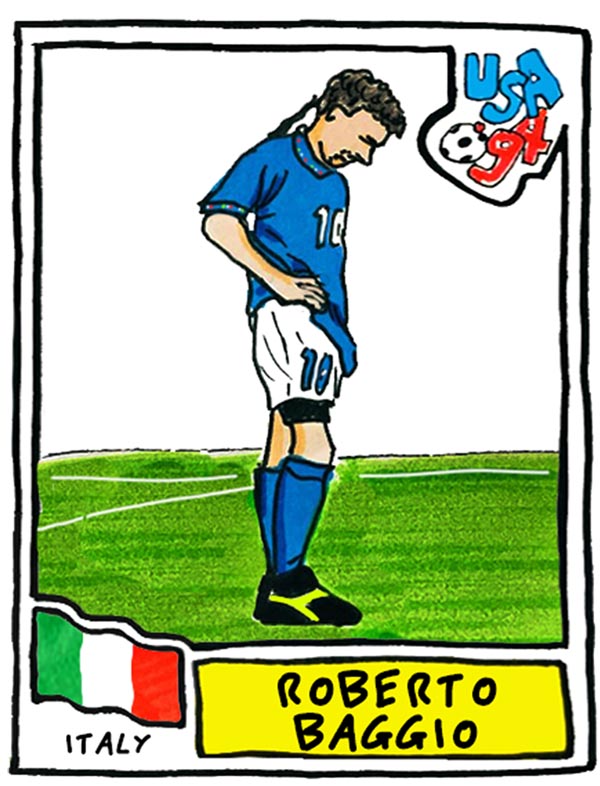 It’s hard even now not to feel a little sorry for Roberto Baggio. After a difficult start in the group stages, the Italy playmaker was inspired during the knockouts, scoring five goals en route to the final. Baggio relied on painkilling injections to face Brazil at the Rose Bowl, but couldn’t find a way past Claudio Taffarel in normal or extra time.

Down as Italy’s fifth penalty taker, the Juventus striker had to score to keep the Azzurri in it. Instead, the Divine Ponytail was foresaken, blazing his spot kick over the crossbar (and presumably out of the Rose Bowl).

What’s frequently omitted from the narrative is the fact that Franco Baresi had fired the first penalty over in similar fashion, while Daniele Massaro’s effort was saved by Taffarel. Still, the sight of Baggio, head down, hands on hips remains the defining image of the tournament. 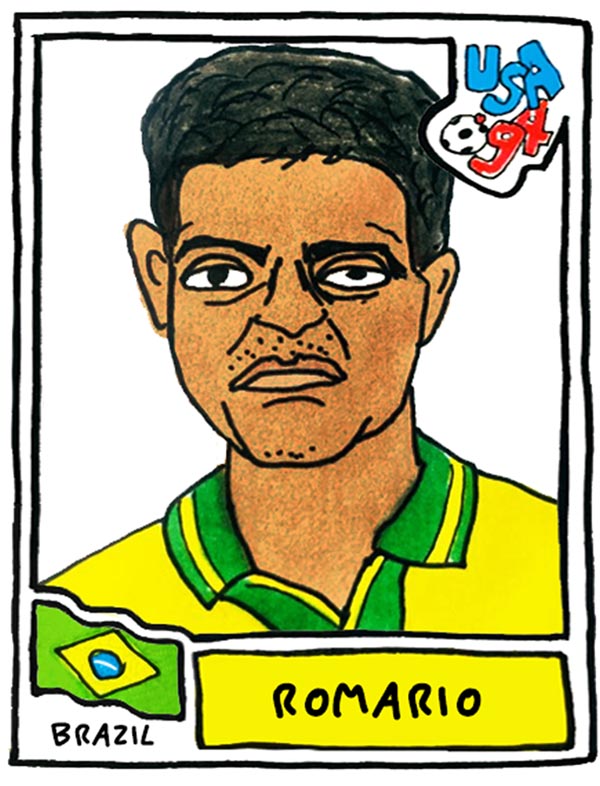 Now heralded as one of Brazil’s modern greats, Romario almost didn’t make it to the World Cup due to clashes with manager Carlos Alberto Parreira. He returned to the national setup just in time to help them qualify for USA.

The coach wasn’t the only person he clashed with, either. Romario was not on good terms with strike partner Bebeto, either – not that you could tell on the pitch. The former scored five and the latter three, with the pair often providing assists for one another. When Bebeto scored against the Netherlands in the quarter-final, he was joined by Romario for the now iconic baby-rocking celebration.

Romario was kept out of the 1998 World Cup by injury, and unsurprisingly clashed with yet another coach prior to his omission from the 2002 squad.

His clinical, magical performances in 1994 remained the high point of his international career. Romario remains the last player to date to have won the Golden Ball and a World Cup winner’s medal at the same tournament. We didn’t believe that stat either until we looked it up on Wikipedia. 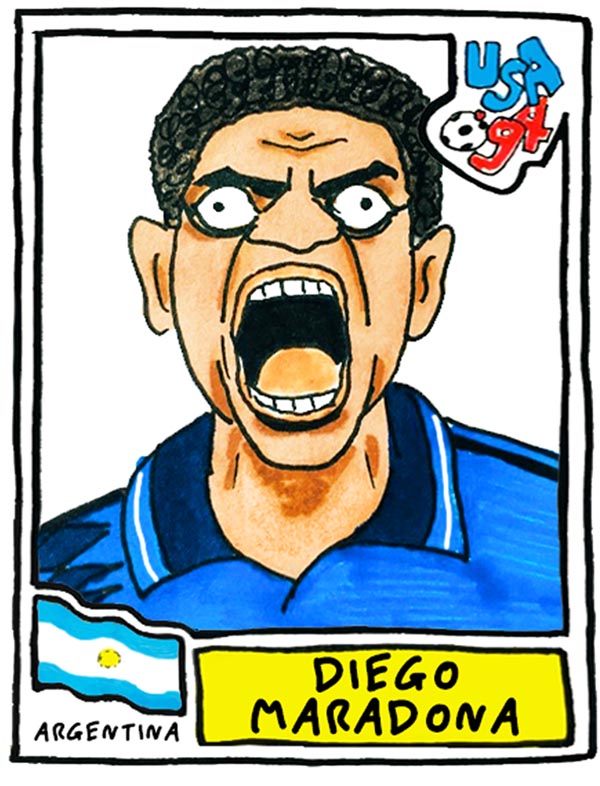 One of the enduring images of 1994 (apart from Sad Baggio) is that of Diego Maradona’s wild celebration of his goal against Greece. Face reddening, eyes bulging, charging towards the lens, somehow stopping short of ploughing into the (no doubt terrified) cameraman.

By 1994, the talismanic superstar of Mexico had become embroiled in multiple personal scandals and served a hefty ban for recreational drug use. Now 34, his appearance in the United States tournament was all but guaranteed to be his last – but it was curtailed in premature fashion.

Two goals to the good in a Group D game against Greece, Maradona jinked inside the area and rifled in a third. However, it was not until after the following win against Nigeria that the captain tested positive for ephedrine and sent home prior to the Bulgaria game.

A controversial career in blue and white stripes came to an abrupt, somewhat anti-climatic end. 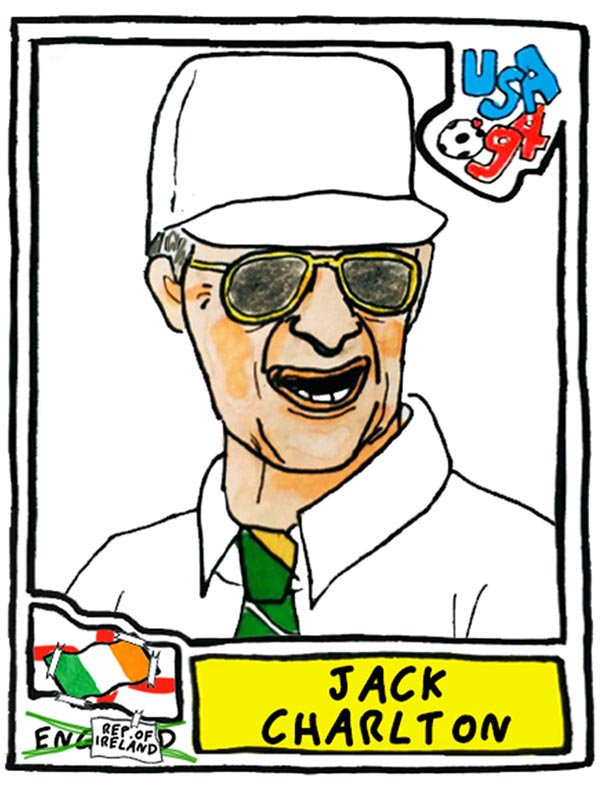 It’s a miracle Jackie Charlton didn’t melt or spontaneously combust in the sweltering heat of the Citrus Bowl in Orlando, Florida.

The Republic of Ireland had already secured a famous victory over Italy in their opening game of Group E, and were looking to clinch qualification against Mexico six days later. However, a Luis Garcia brace either side of half-time saw the Irish heading for defeat. With twenty-three minutes remaining, Tommy Coyne made way for John Aldridge as part of a double sub – but Aldridge was bizarrely prevented from entering play by a jobsworth official, leaving Ireland temporarily a man down.

With tension simmering on the sideline, it was inevitable that Wor Jackie would boil over. His angry scuffle with the (at fault) FIFA official earned him a touchline ban for the following game.

Meanwhile, Aldridge – whose steaming tirade at the same target was broadcast to millions of televisions worldwide – would score a vital consolation. In the aftermath of a goalless draw against Norway, it was this goal that saw the Republic of Ireland squeak through to the knockouts by the narrowest of margins. 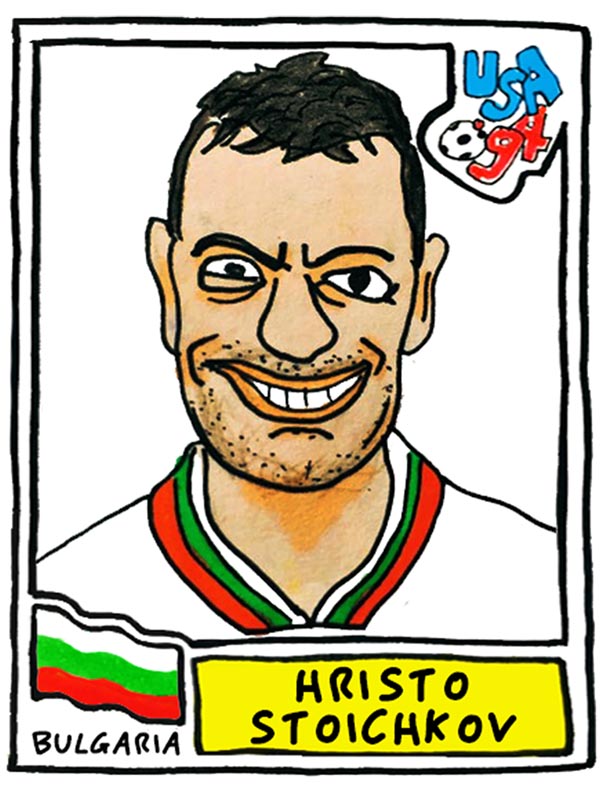 Another player with a somewhat short fuse, Hristo Stoichkov was the focal point of a Bulgaria team that shocked the world at USA ’94.

After a comprehensive defeat at the hands of Nigeria in their opening game, few may have expected Bulgaria to be a real force at the competition. However, a 4-0 thumping of Greece was followed by a surprise 2-0 win over Argentina.

Stoichkov dispatched two penalties in the Greece game and scored the opener against the Argentines. The in-form Barcelona forward wasn’t done yet. He netted the opener in the shootout win over Mexico, then was on target in the seismic defeat of defending champions Germany. His third successful penalty conversion gave Bulgaria hope in the semi-final against Italy, but a first World Cup final was not to be.

Having scored six goals in five consecutive games, Stoichkov was the joint winner of the Golden Boot (along with Oleg Salenko), and was third behind Romario and Baggio in the Golden Ball stakes. 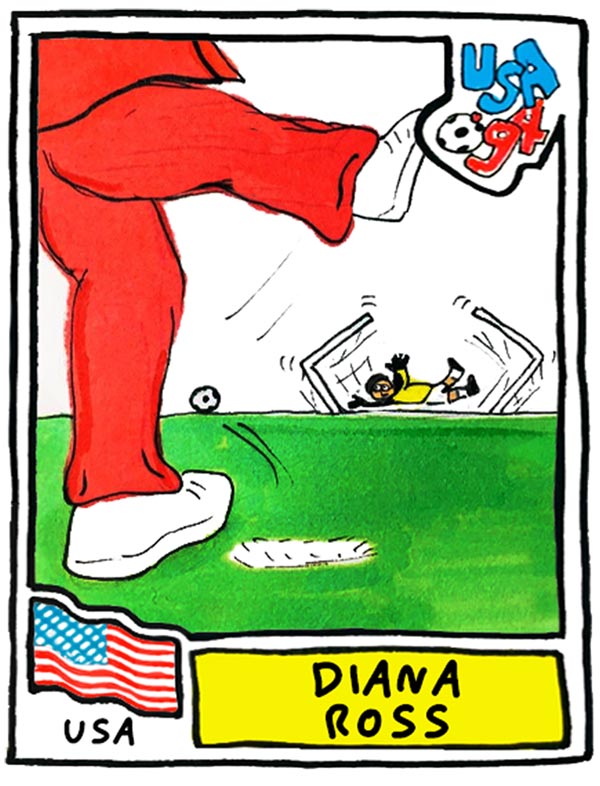 Finally, the Italians were not the only ones to miss high-profile, high-pressure penalties.

In the first own goal of the opening ceremony, emcee Oprah Winfrey fell down a hole whilst introducing Diana Ross to the Chicago crowd. Undeterred or unaware, the Motown legend raced across the field, throwing out a few lip-sync feints and dummies, before reaching the penalty spot.

Ross stepped up and dragged her spot kick wide of the target – but the target exploded anyway, falling apart in anticipation of a goalbound effort. We imagine FIFA president Joao Havelange was outraged by the flagrant match-fixing.

During the knockouts, no fewer than eleven players would suffer a similar fate from the spot. You could say Diana Ross was at the start of this particular chain reaction.