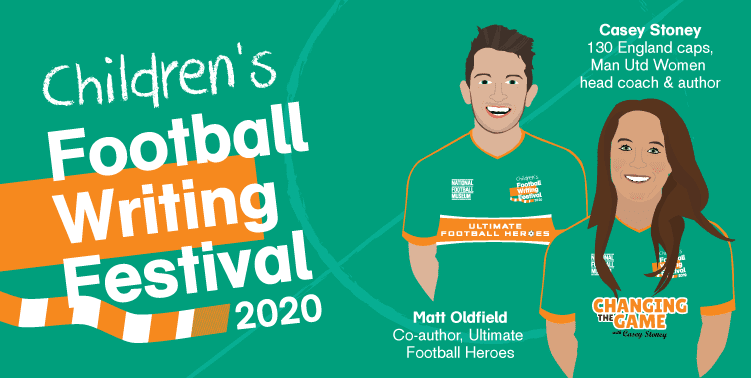 This February half term, we're proud to launch the first ever Children's Football Writing Festival.

The Thursday event will bring together some superb storytellers and key figures from the world of football, encouraging children to pick up a pen and transfer some of their football flair to paper.

The programme of events kicks off at 10:30am with a Pickles the Dog storytelling session in the Play Gallery's Discovery Zone. It’s 1966, and the Jules Rimet has gone missing! Can Pickles help save the World Cup? This interactive session with puppets and roleplay is perfect for under-7s.

At 11am, former England international and current Manchester United Women head coach Casey Stoney will be showing off her awesome new book, Changing the Game: Fantastic Female Footballers, as well as giving us an insight into what life is like playing for club and country.

Fan favourite Matt Oldfield, co-author of the Ultimate Football Heroes series, will be running some of his trademark high-energy creative workshops at 12pm, designed to get kids thinking creatively about the words they use. Conjure up your own football superstars and describe their exploits in your very own story.

Perhaps you fancy yourself as the next voice of Match of the Day? Learn some of the key techniques of sports journalism in one of the museum’s most popular sessions, Good on Paper (1pm). Write your own broadcast script before picking up the mic and having a go at some of your own football commentary!

There'll be plenty of additional activities to get involved with on every floor, including bookmark-making and Panini competitions. Tick off two or more activities on your FWF Fixture List and you can even claim a free prize!

All of this and much more is included in your admission ticket, and is free for City of Manchester residents.