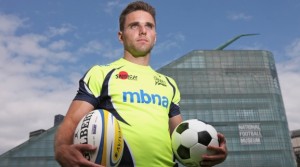 The National Football Museum kicks off a summer celebrating all the different ways you can play, by throwing a real curve ball at soccer fans: we're playing Rubgy!

With the Rugby World Cup coming to Manchester in October, the museum is hosting the Webb Ellis Trophy Tour during the afternoon of Saturday 25 July. Named after the man who was said to have first picked up a football and run with it, thereby creating Rugby, the trophy will be available for fans of all games to get their photo with between 11.30am - 4.00pm.

During the day there'll be opportunity for visitors to show off their skills, or learn some new ones, with both Rugby and Football games to play. Take kicks over or under the posts, pass sideways, forwards and backwards with hands and feet, and find out more about how the two types of football became the games we know now!

Top rugby players and coaches from Sale Sharks will be on hand, as well as the guys from Little Sports Coaching to help you play throughout the day. Plus there'll be fantastic vocal performances from Chant! Productions, with songs from the terraces of both sports.

We're asking fans of all sports and players of all abilities to join us at the National Football Museum and kick off their summer, with the Rugby World Cup!

Download the museum's 'Order of Play' for a fun calendar, crammed with events to keep boredom at bay all summer!