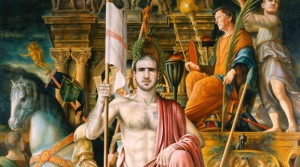 Excerpt of The Art Of The Game by Michael Browne

Arriving in English football in 1991 with a reputation for being difficult to manage, Eric Cantona quickly assisted two famous clubs to win a title for the first time in many years.

The Frenchman arrived on these shores via Auxerre, Marseille and Nimes, where fights with teammates, dangerous tackles and disciplinary issues blighted his game. Jaded by perceived harsh treatment by the French Football Federation, Cantona even retired briefly at the age of just 24.

He was convinced instead to move abroad to pastures new. Elland Road was the destination, and he signed for Howard Wilkinson's side midway through the 1991-92 campaign, initially on loan from Nimes. He scored three times as Leeds United clinched the last ever Division One Championship, and was a regular on the scoresheet in the first Premier League season.

However, frustrated at being dropped by Wilkinson following a string of below-par performances, Cantona would request a transfer from Leeds. Chairman Bill Fotheby had phoned Manchester United counterpart Martin Edwards to enquire about the availability of Denis Irwin; by the end of the call, Manchester United were preparing to table a bid for the controversial Cantona.

Two days after submitting his transfer request, Cantona signed for the Red Devils for a fee of £1.2m. He was the catalyst to Alex Ferguson’s first top division title in England in 1993, becoming the first player to win back-to-back top-flight titles in England with different clubs. The following season there was a League and FA Cup double, despite Cantona picking up three red cards during the year. 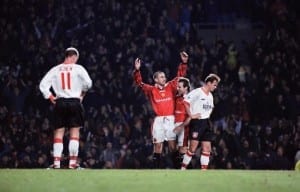 January 1995 saw the infamous ‘kung-fu’ kick aimed at a Crystal Palace fan after the hot-tempered Frenchman had received his marching orders again. A criminal conviction and an eight-month ban followed (as well as the enigmatic ‘seagulls’ quote), which seemed to have ended his career in English football. However, a remarkable comeback reinvigorated Manchester United’s season, overhauling Newcastle’s 10-point lead to snatch the title. An FA Cup Final win made Manchester United the first club to win the double on two occasions. In 1997, Cantona won his fifth English league title in six years (one with Leeds, four with Manchester United), retiring at the end of the season aged just 30.

Cantona typically played just behind an out-and-out striker, finding gaps between the opposition midfield and defence from which he could orchestrate attacks. His vision and creativity helped him stand out, but he was also physically imposing, and relished the robust nature of the Premier League. Known as a scorer of great goals, rather than a great goal scorer, Cantona's finesse was matched by a will to win that meant he was often the provider of game-changing moments. 96 goals in 220 games in English football was still an impressive return.

In a way only ever previously achieved by George Best, Cantona was much more than a great player. He was an icon, an enigmatic crowd pleaser and an inspiration to fans and fellow players alike. "He illuminated Old Trafford", Alex Ferguson said. "The place was a frenzy every time he touched the ball." Roy Keane wrote later: "Collar turned up, back straight, chest stuck out, Eric glided into the arena as if he owned the place". Cantona was voted PFA Player of the Year in 1994.

Ryan Giggs acknowledges his role in inspiring the special crop of youngsters breaking into the team: "Gary and Phil Neville, Nicky Butt, Paul Scholes, David Beckham and myself - we all followed his lead." A painting by Michael Browne, which was purchased by ‘King Eric’ himself, shows Cantona as Christ with the Neville brothers, Butt, Scholes and Beckham as his apostles. The painting is currently on loan to the National Football Museum from the Cantona family.

Eric Cantona was selected to join the inaugural National Football Museum Hall of Fame in 2002 but has yet to collect his trophy. When he does it is bound to be a special, but impossible to predict moment. In the phrase first coined by Leeds United fans, ‘Ooh, Aah, Cantona!’